Have you ever just started getting rid of anything and everything because you just can’t take the clutter anymore?! Once upon a time I had really wanted and consequently received a particular shell lamp for my birthday. During one of my de-cluttering binges, I almost put it in the donate pile. I’m so glad I thought twice and kept it, because once I saw the MOST awesome DIY Twig Lamp Shade from Gina, over at The Shabby Creek Cottage, I thought my shell lamp might be a good candidate for a twig lamp shade with a coastal twist. 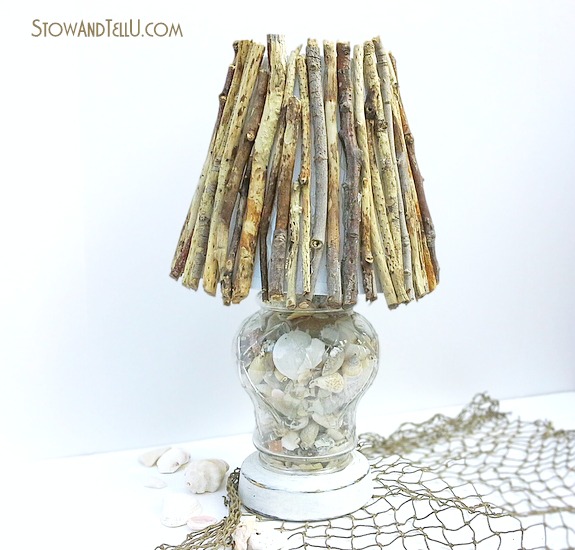 So, to try and add a coastal, beachy touch to compliment the shell lamp base, I used a faux weathered technique on the twigs before I started. I was hoping to achieve a faux driftwood look. All in all, I think this DIY twig project gives this shell lamp a whole new life. 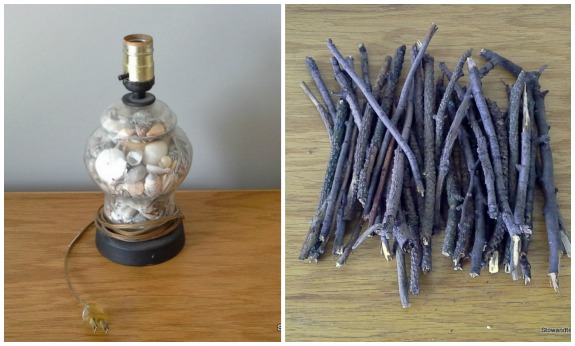 Here is how the lamp and twigs looked before I started. 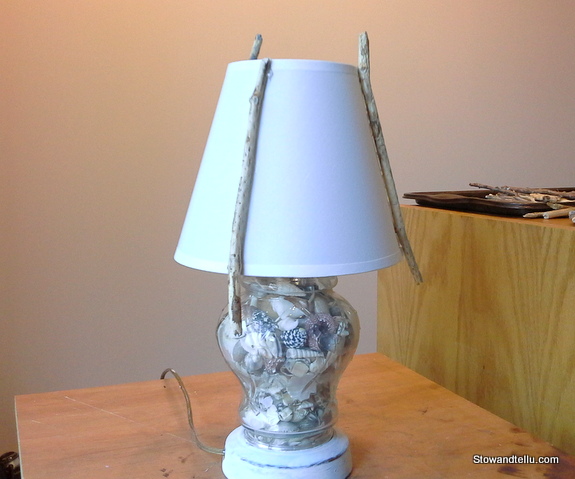 Glue on 3 twigs at equal distance apart. Make sure to lay twigs straight up and down.

I gave the lamp base a coat of white chalk paint and then sanded it down for a bit of aging. As I mentioned, I gave the twigs the faux weathered twig treatment.

Next I added a plain white lamp shade in an appropriate size.

I measure the length of the lamp shade and cut the twigs about 1″-2″ longer the the lamp shade length for some wiggle room, and then started by hot gluing three twigs at equal distance apart on the lamp shade. 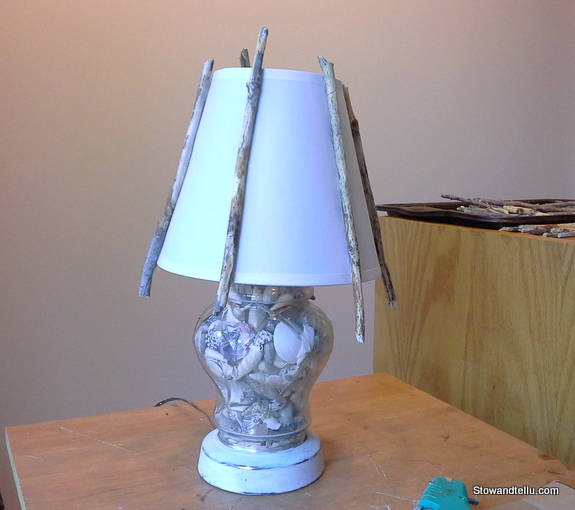 Glue on 3 more twigs at equal distance apart, between the first 3 twigs. 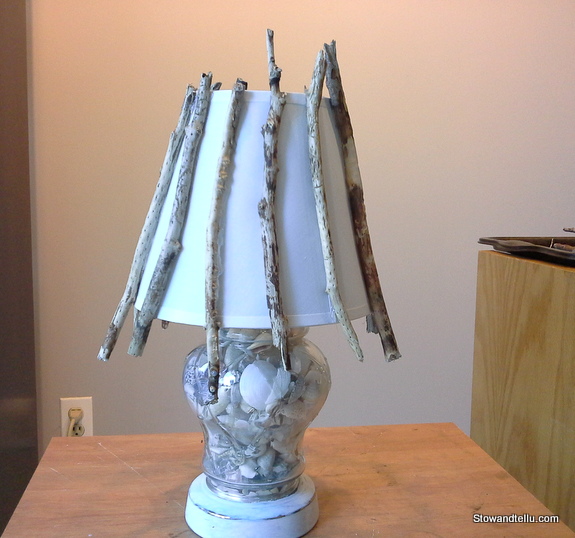 Glue on 6 more twigs in same fashion between the first 6 twigs.

Then I added six more twigs, equal distance apart between the six twigs already on the shade. 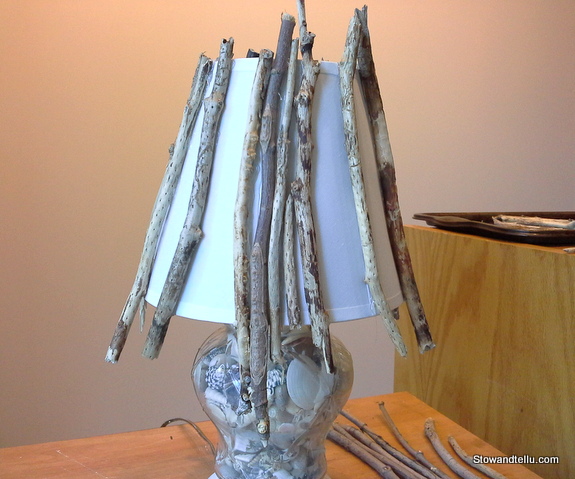 Fill in the gaps with the rest of the twigs.

From there I just started filling in the gaps with the rest of the twigs, trying to keep the shade balanced by using bigger and smaller twigs intermittenly around the shade.

Leaving the twigs a little longer than the shade allowed me that wiggle room I needed to find the best placement for the twigs, as they tend to have little bends and knots and such. 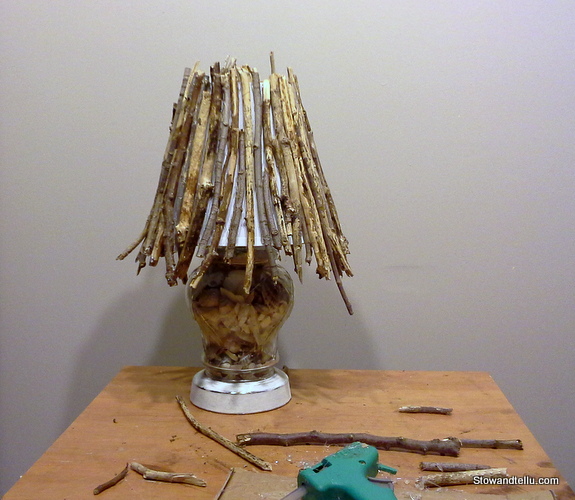 Since the shade was larger at the bottom, I filled the bottom gaps in with shorter twig pieces. If you look close, you can see them, but you can hardly tell they aren’t full length.

Last step was trimming down the twigs with the garden shears at the top and bottom. I did not trim them down perfectly even as I thought a little variation in height would keep the look more rustic.

That was it. Gluing the twigs onto the lamp shade took me about 1-1/2 hours. 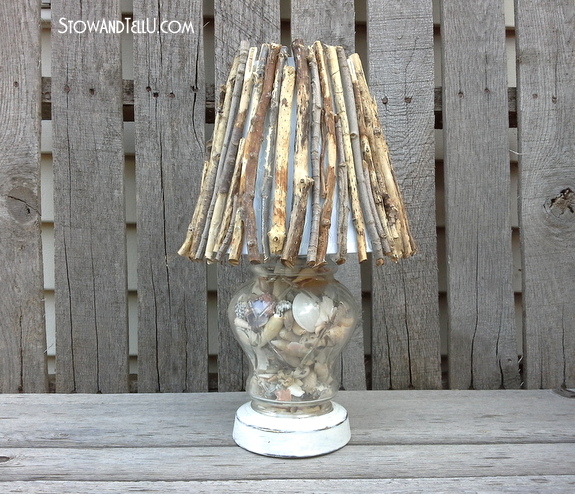 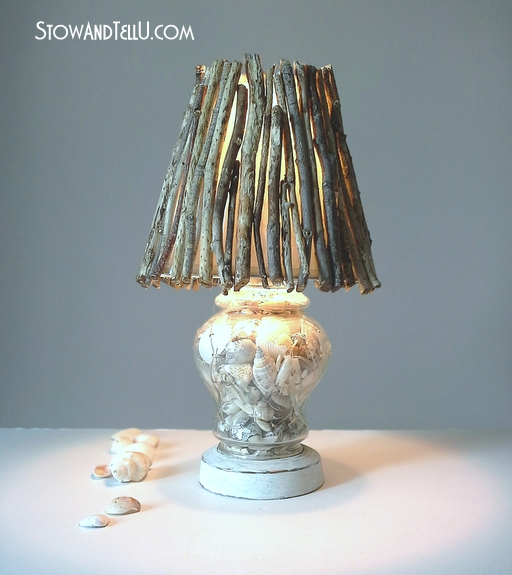 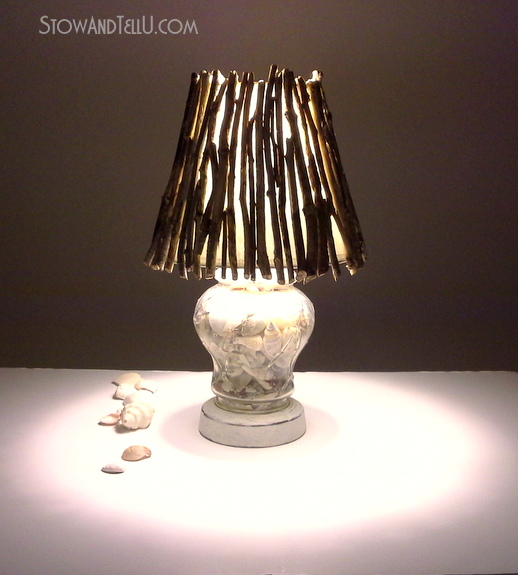 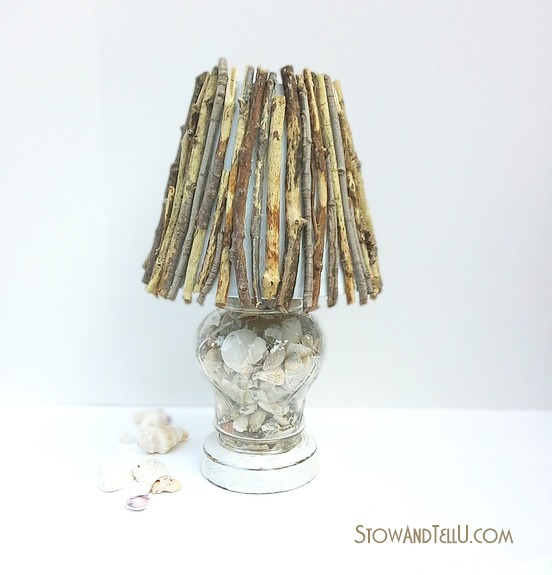 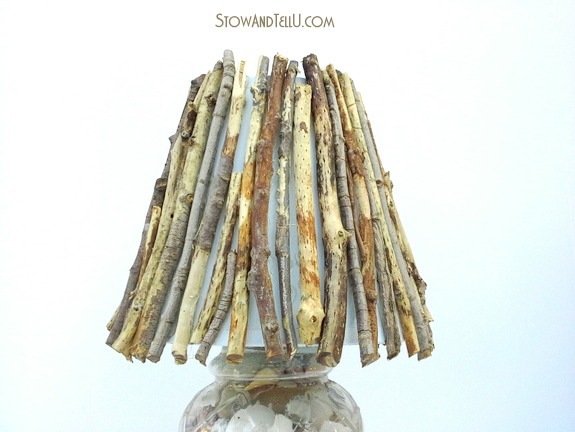 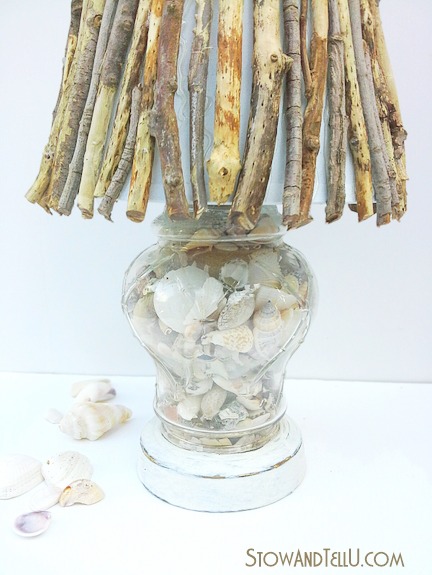 I have just the place for this lamp in my guest bedroom, but it will have to sit tight as the guest room is full to the brim with basement stuff while our basement update is underway.

You can check out more:

Thanks so much for stopping by ~ Amy