Nashville hot chicken is the food to try when visiting Tennessee and the country music capital of the world.

What is Nashville hot chicken?

It’s southern fried chicken with a peppery spice rub that is usually so hot, it has its own rating system. The ratings may vary from chicken shack to chicken shack. We visited Pepperfire where the temperature range offered was  Lite Mild, Mild, Medium, Hot, XHot, XXHot.

When I saw on the menu that they offered a “lite mild”, I had to wonder if anyone dared to order the XXHot, and if so, did they live to tell about it? 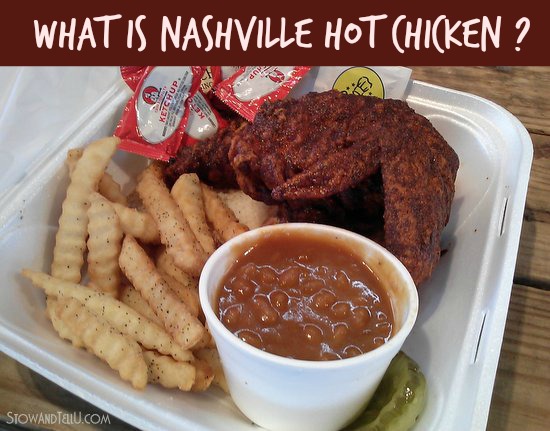 What Nashville hot chicken is NOT:

It’s not sweet like the ketchup based barbequed style chicken.

It doesn’t have a dry and crispy coating like the typical southern fried chicken would have.

It’s not seasoned with a vinegar based hot sauce like Buffalo style chicken wings.

What makes hot chicken unique is that it is seasoned with a cayenne pepper paste that turns into a wet rub by the time it goes on the plate or in the basket.

As the story of cheatin’ lovers goes in Nashville, so does the history of Nashville hot chicken. Time.com tells a great tale of how hot chicken became the unique and popular dish of Nashville. 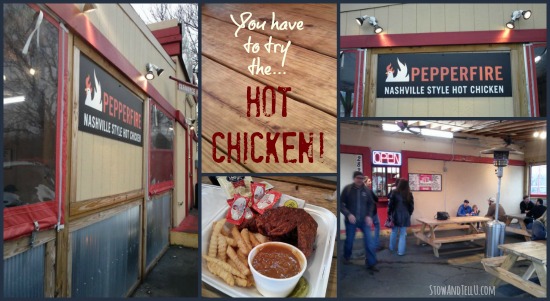 Made to order as boneless tenders, breast quarters, half chickens and several other options, the heaping serving of hot chicken atPepperfire was incredibly moist and fresh. There are chicken shacks all over Nashville, each with their own special take on the recipe. We asked a few of the locals where to go get some hot chicken. Pepperfire and Prince’s were two of the places that were recommended, but the list goes on.

Where to get the Recipe?

Since not everyone is near enough to Nashville to just stop off and try the hot chicken, someone might want to try it at home.

Of course if you google Nashville hot chicken, you can find several recipes, but I found this exclusive award winning Hot Chicken Recipe from Nashville Scene that appears to be quite a winner, no pun intednded.

The story goes on…

A week after we got back from Nashville, my son (a spicy food connoisseur) happened to be driving through Nashville himself. I suggested he take a detour for some hot chicken. Not only did he stop off, but planned on ordering the XXHot, as well.

Cool as a cucumber, he called back shortly after he finished his meal.

Only then did he proceed to tell me that he decided to with the Hot rather than the XXHot for his meal; however, he did get a to-go box of the XXHot to sample later, in the privacy of his own hotel room… in the event that the XXHot would provoke coughing, choking, or immediate heart failure.

He called me a day or so later after he tried the XXHot.

Admittedly he said that although he was able to eat the XXHot chicken, he did experience some watering of the eyes and perhaps a few other bodily caution signs that might suggest that if you are going to try the Nashville hot chicken, it’s best to leave the XXHot to all the liars, cheaters and heartbreakers.

Hope you are having a great day ~ Amy