As some of you may know, I grew up just outside of Chicago, near Route 66. Exploring some of the old Rt 66 stomping grounds has been an intriguing past-time. I’m working towards putting them all together into a travelogue titled “Route 66 Wandering”.

Anyway, If I had logged and numbered them this way from the beginning, then Henry’s Drive-In and the Cindy Lyn Motel would be #5 on my list of official “wanderings”.

Some of our “wanderings” have been planned, like when we went for breakfast at Lou Mitchell’s Diner (Wandering#1).

Others have been last minute plans, like when we stopped off for a real Chicago hot dot at Henry’s Drive-In on Ogden Avenue in Cicero. 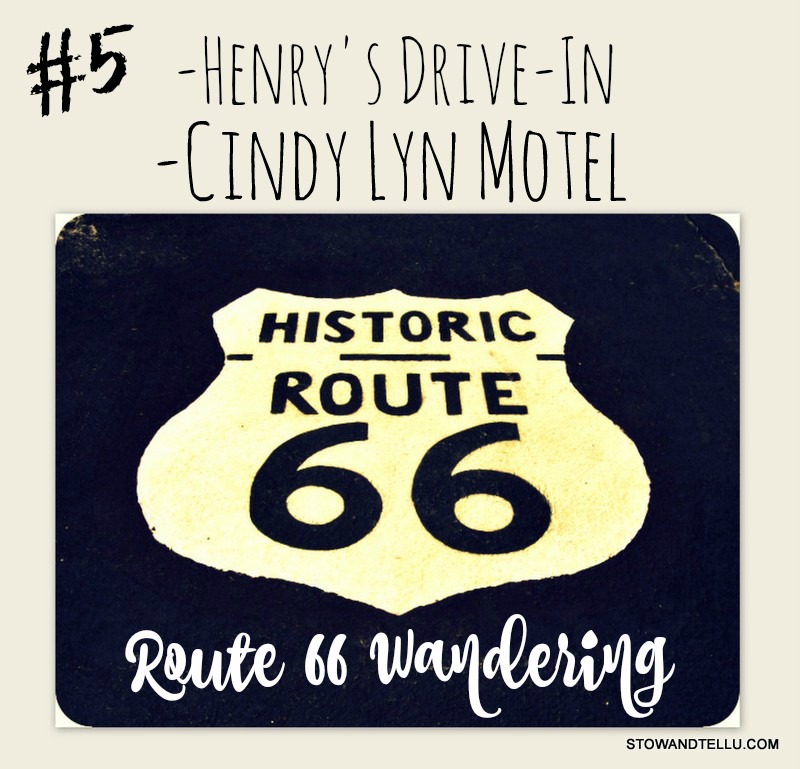 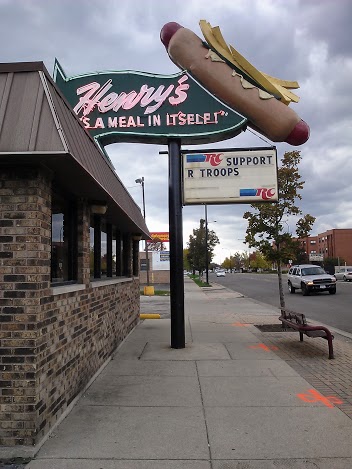 When we drove up on Henry’s there were no flashing lights or Rt 66 angels singing. The Henry’s marquis was certainly a treat to find, but unfortunately pavement and progress have done their best to tamp down the ambiance, if you will. 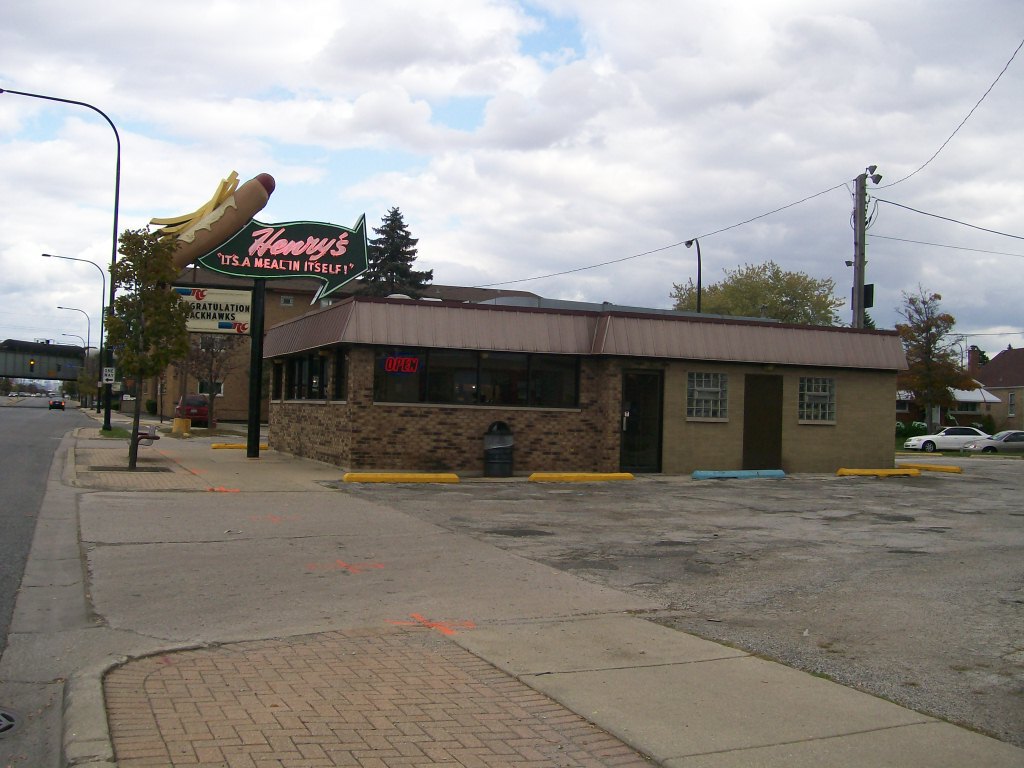 They have a few old photos inside the restaurant, showing off the “old days”. At one time Henry’s had a walk-up window and was only half the size that the building is now.

The picture above shows blond brick on the back portion, which I’m assuming is the original part. 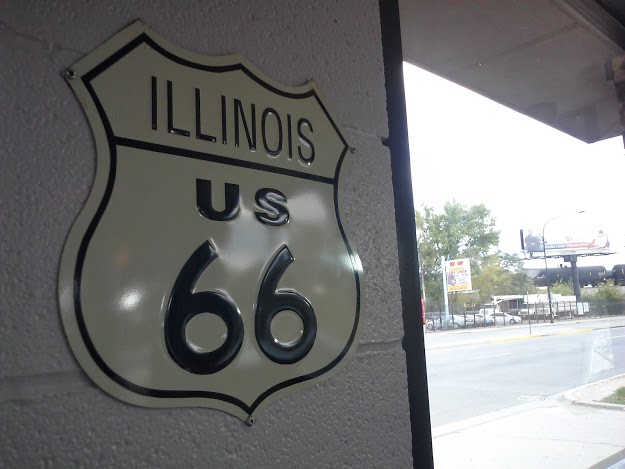 There’s a few other telltale signs hinting at a Route 66 connection. 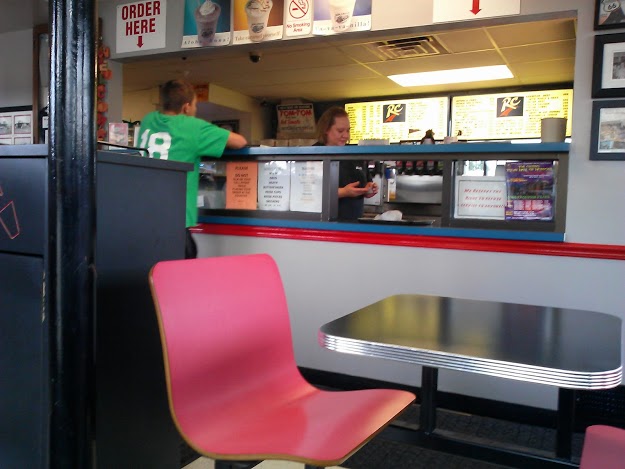 But when the food is the real draw… you don’t have to brag about such affiliations, now do you?

“It’s a meal in Itself” says the Henry’s marquis. 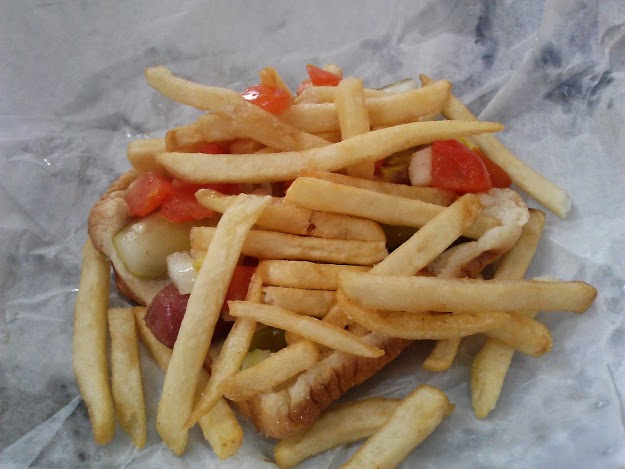 Everyone says a real Chicago hot dog gets everything on it, plus mustard.

But not a drop of ketchup!!

A Henry’s dog is always served with everything on it, and fries right on top.

Yes. You can order with ketchup only, or have it any way you want.

But you do have to ask. Ahem.

(All I ever eat are ketchup-only hot dogs.) 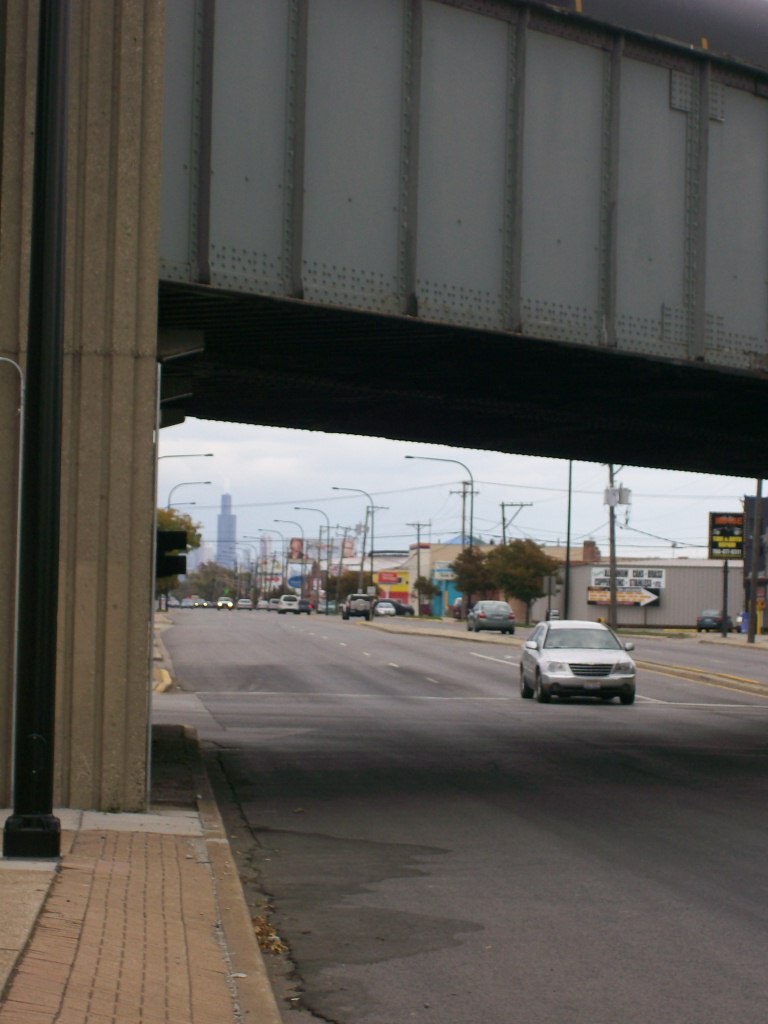 Just beyond this bridge you can see the outline of the big city. It’s probably about a 7 minute drive, with no traffic. Back in the 1950’s when Henry’s was new on the strip, this would have been considered more like the boon docks to the city dwellers. Now, you’d have to follow this road west another 30 miles before you hit the real boonies. 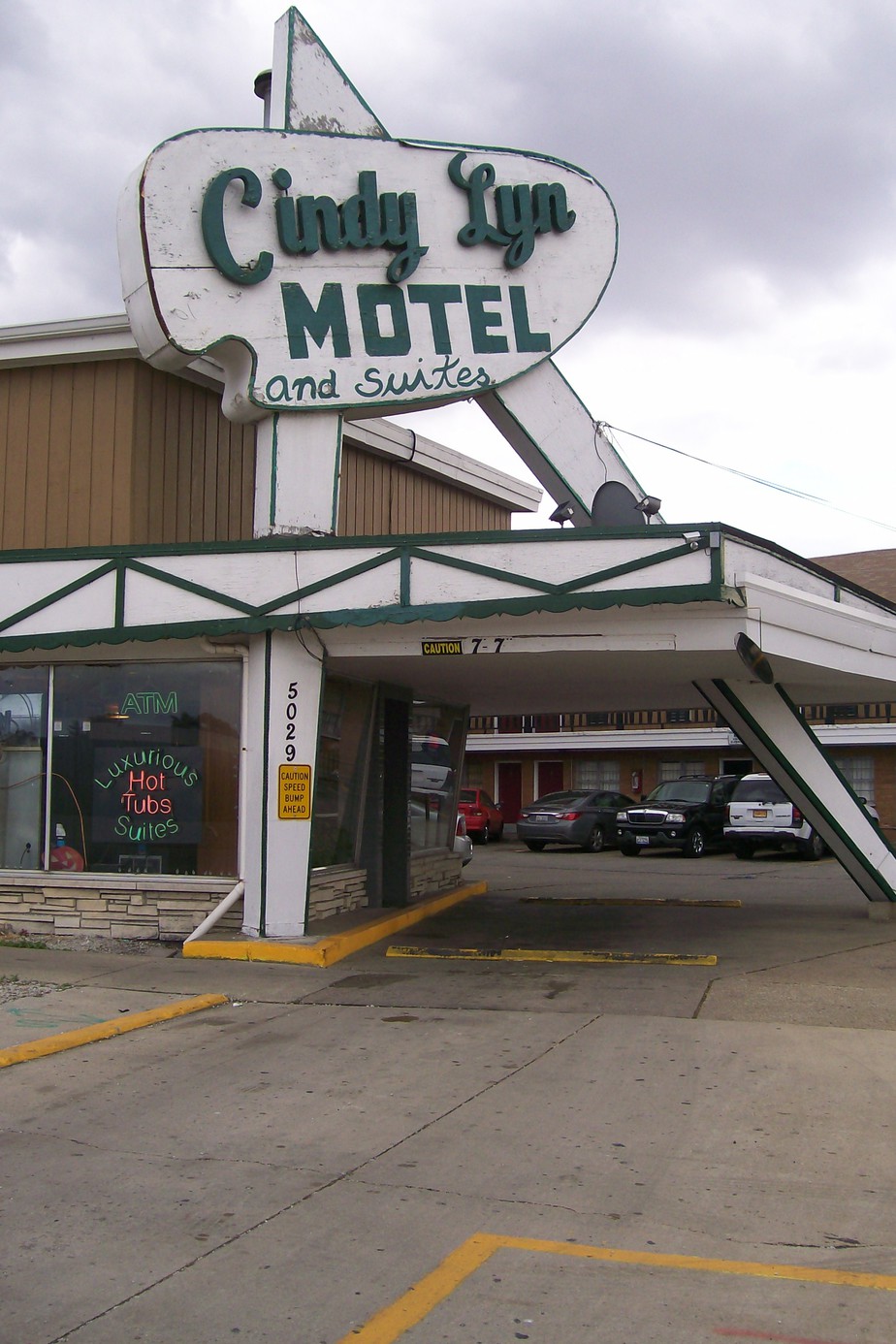 Just a few miles down Ogden Ave, and east toward the city remains the Cindy Lyn Motel. This motel has been around since 1960 and believe it or not, the same family still owns it.

Read more about the way it was “back then” at the Cindy Lyn, here. 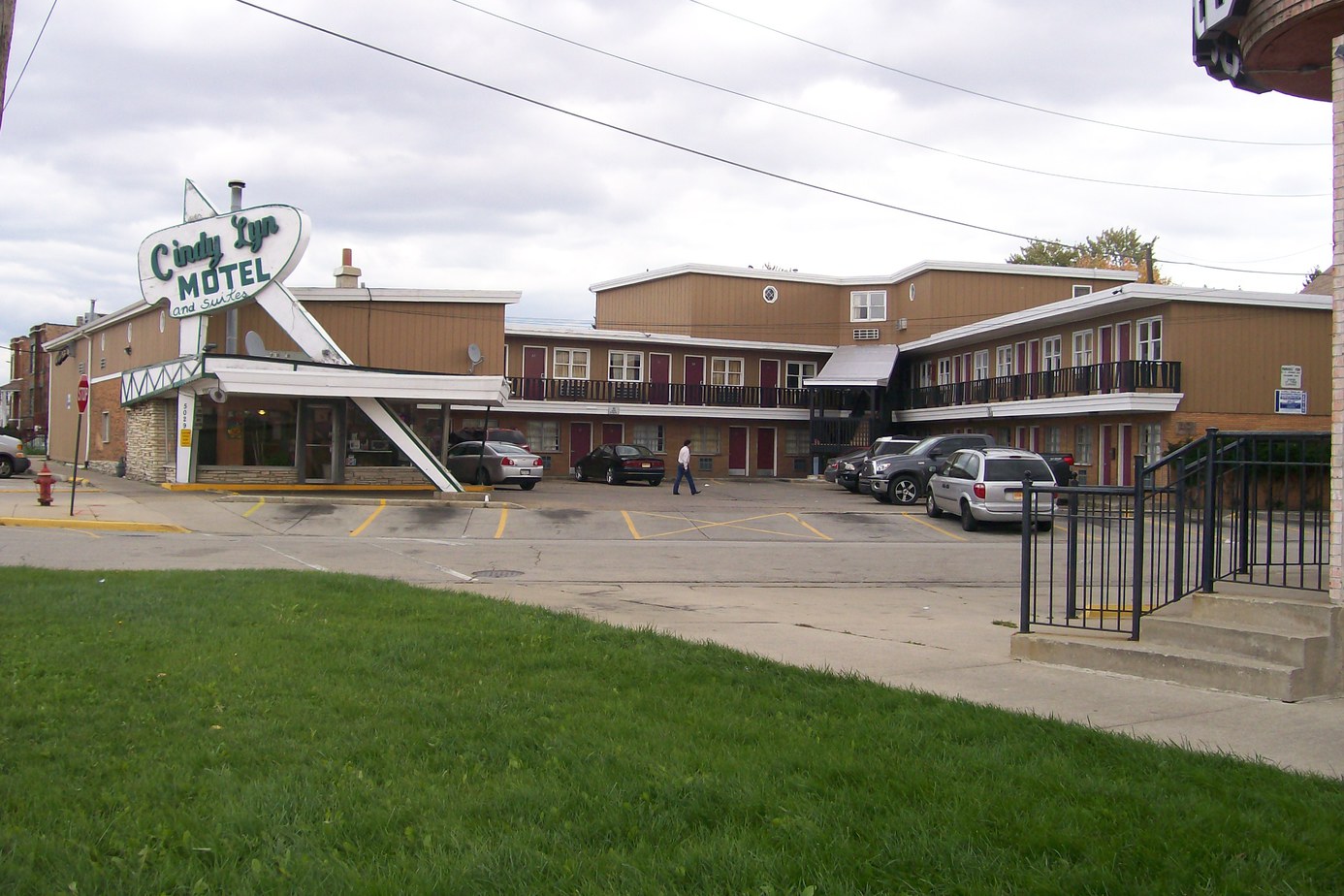 The Cindy Lyn is considered one of the few remaining original examples of Retro 1960’s architecture. Also called Googie and Atomic Age architecture, you can read more about the declining preservation of this type of architecture, here.

This Rt 66 jaunt took us all of about an hour. And we did it just before I had to drop my son off at the airport. It was fun to stop off and see these old sites and imagine the glory days. In reality the old blends with the new, and imagination is key.

What I found especially cool is that both Henry’s and the Cindy Lyn are both original and still in business after +50 years. That alone is a history maker in itself these days.

Hope you enjoyed wandering the route with me! ~ Amy