Are you like me with an attic or basement full of old photos, collections and mementos (otherwise known as junk) stowed away for safe keeping because you know you’re going to need it, want to look at it, or touch it again? You just can’t part with it…not yet, maybe never!

I’ve always wanted a pony, and ahh no,  I do not have a pony tucked away in my attic. 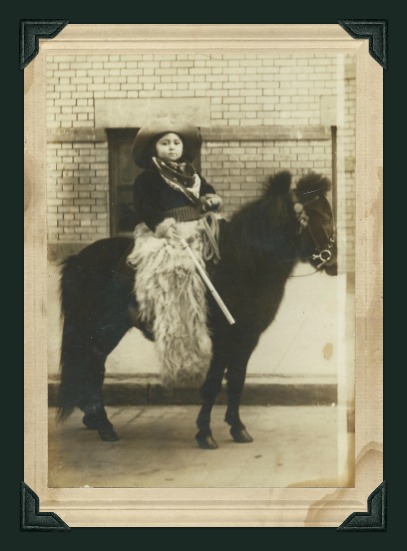 But I did come across a very old photo once, while at an estate sale, of a child pictured on a pony dressed in full western attire. I was fascinated immediately and purchased it right on the spot.

At the time, I remembered seeing an old photo of my grandfather on a pony in the same type of cowboy get-up. As time went by I came across various other portraits of cowboy clad children on ponies, although I couldn’t say for sure where I saw them. I found this whole practice very curious, very curious indeed.

Anyways, I took my pony portrait home and displayed it on a shelf for several years. Eventually it was taken down and stored in my attic, but the burning question still remained.

Why were there all these vintage photos of children on ponies? And more so, why were they so often dressed in cowboy attire?

Was it a right to passage for these children, like that of getting your own cell phone is for the kids of today?

Was it a matter of prestige? “…my child has had his picture taken… on a pony… while in full cowboy attire…from this day forward, he is officially a respectable member of society… “

WHAT WAS THE DEAL???

With a little help from Google, I think I finally have at least a semblance of an answer.

According to Photo.net, circa 1950’s salesmen would navigate the streets of cities and towns with a pony in tow, enticing the neighborhood children to get their picture taken on a pony, often while dressed up as a cowboy or cowgirl. Children in droves would run home and beg their parents to pay the photographer the going rate for a picture with a pony. Several people share their pony pictures and stories, here.

I couldn’t find much more of an explanation on this subject without delving deep into research. So for now, I would have to assume, that for the most part, it was really more of a marketing ploy like you would see at Disney World, if you take your picture with Mickey Mouse.

I have to wonder if there is more to the story though, going further back in time. 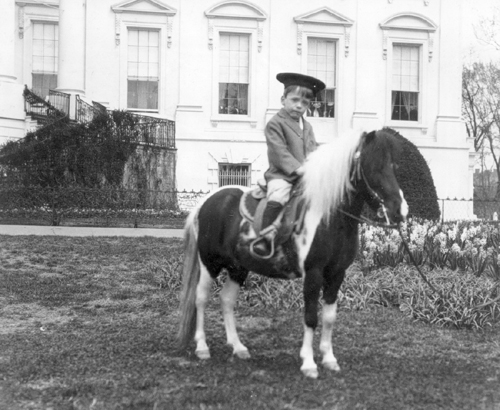 This photo is of Quentin Roosevelt (son of President Theodore Roosevelt)  and it was taken circa 1902.

I think my grandfather’s photo was taken not too long after this one, but way before the 1950’s.

I would love to hear your thoughts.

To see a large collection, check out this Children on Ponies board on Pinterest

Thanks so much for stopping by. I hope you are having a great weekend! ~ Amy