Whether you are a history buff, partial to interior decorating, or you just love home tours; the salvaged and revived log house at The Homeplace will entice your senses and leave you pondering at, not only how far we’ve come in the last 150 years, but how much has stayed the same, as well.

The Homeplace at Land Between the Lakes 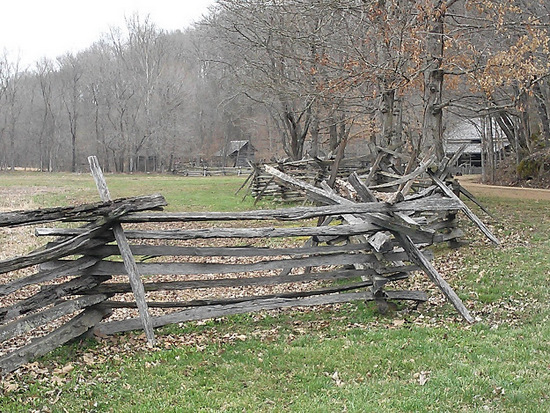 Split rail fence at the Homeplace in Land Between the Lakes

The fee to enter The Homeplace farm is reasonably priced, and you have to pass through the store to gain access. Once on the other side of the building (and I think a hillside), you feel like you’ve entered another era altogether.

We walked along a weaving trail with a rocky hillside to our right and a split rail fence, typical of the era, on our left. 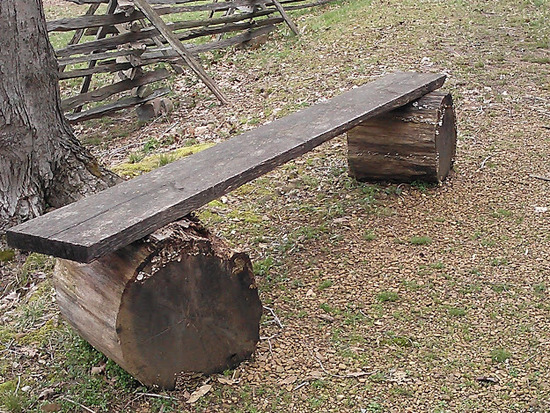 Log bench at the Homeplace in Land Between the Lakes

An era appropriate bench was strategically placed halfway along the trail. I’ve seen so many bench styles in my day that have probably taken a lot longer to build. Who needs all that fanciness when you can just cut up a tree if a few places, and voila: sturdy bench? Note-to-self: make one like this for the back yard in our next house. 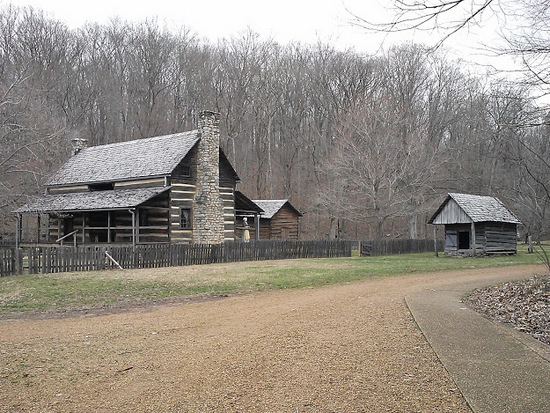 Log cabins at the Homeplace in Land Between the Lakes

We turned the final corner and came upon an opening with a view of the most amazing log and mortar style house, and outhouse for that matter, as indoor bathrooms had not been implemented just yet in 1850. I was awed over and ready to climb the steps and see what was inside.

Curiously, there was a lady dressed in 1800 era attire on the porch who hollered out to us, “hurry up, the wedding’s about to begin…”.

I was with my son’s friends, Tony and Emma. The three of us looked at each other with confusion for a moment. I thought that perhaps someone had rented out the grounds to get married. We weren’t aware of being invited to the wedding, so we continued on into the log house, hoping we weren’t intruding on someone’s wedding, but way too enticed to turn around and leave, even if we were.

As I was told by one of the staff, the house was once in another location, but had been raised and moved onto what is now The Homeplace – LBL grounds.

Bedrooms inside of the log cabin at the Homeplace

Some photos might be blurry and a bit dark. I do apologize, but then again, electricity hadn’t been implemented as of yet, either; and to my understanding, every detail in the preservation of this log house has been re-created with as much authenticity as possible. Enjoy: 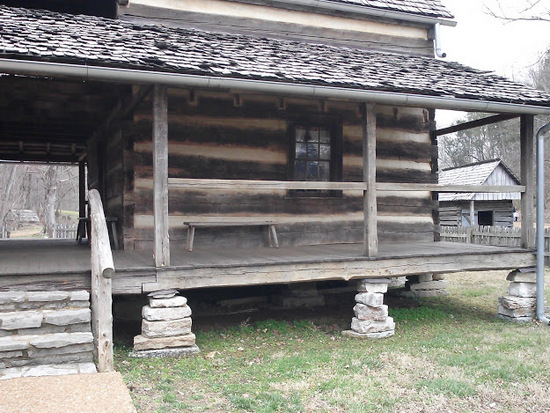 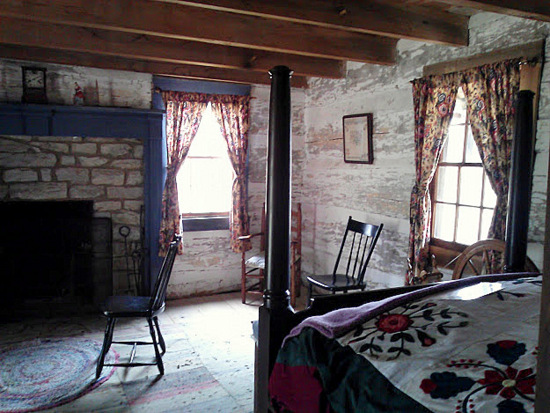 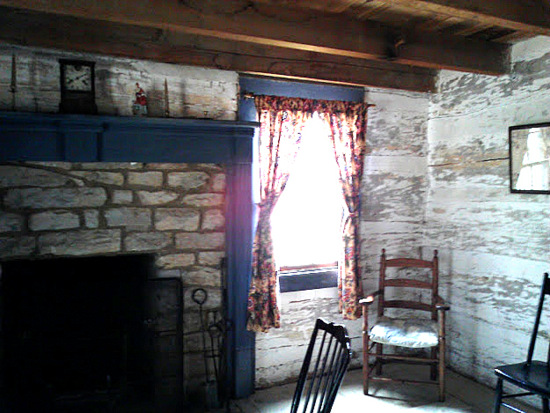 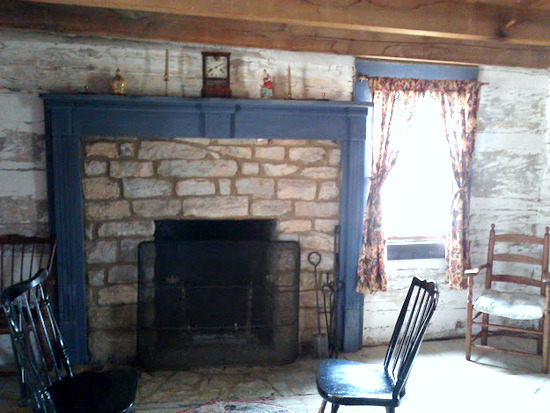 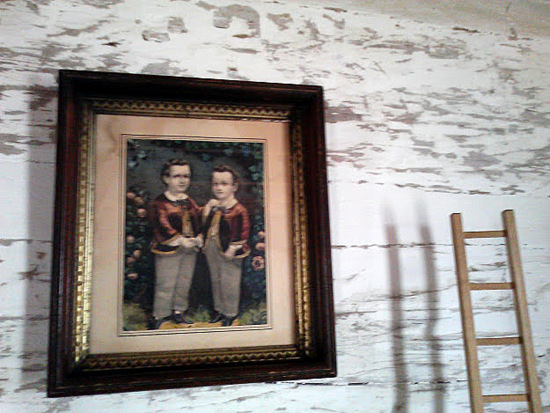 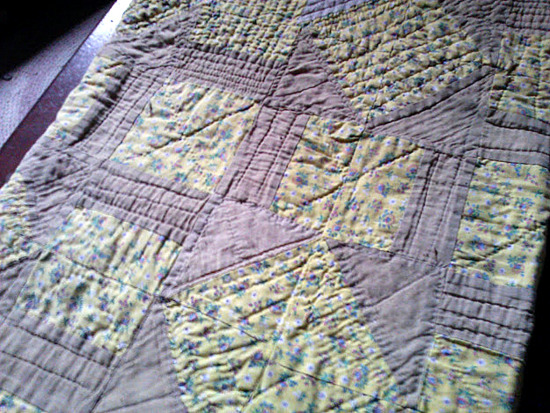 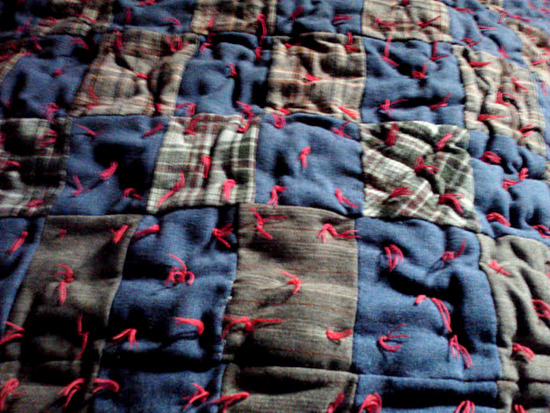 Authentically styled quilts, and there’s a lot more for sale in the Homeplace shop.

The kitchen, although part of the same log house structure, was in it’s own building, meaning that one would have to walk outdoors, along the porch and then back indoors. 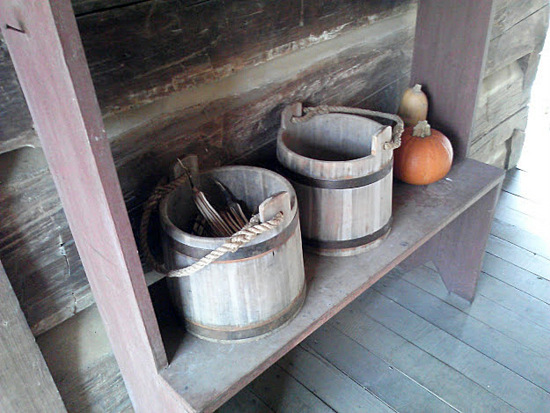 The reason for this is that in the event that if the kitchen caught on fire, it wouldn’t burn down the entire house. Pretty clever, if you ask me. 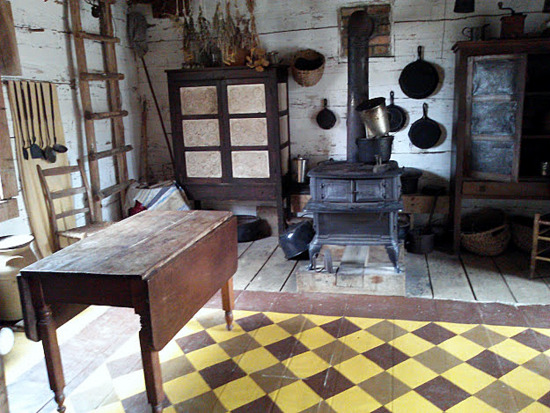 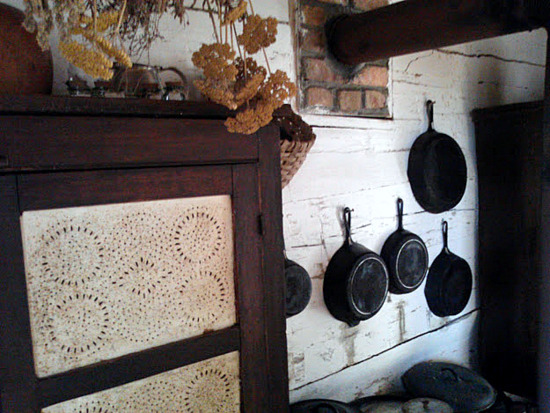 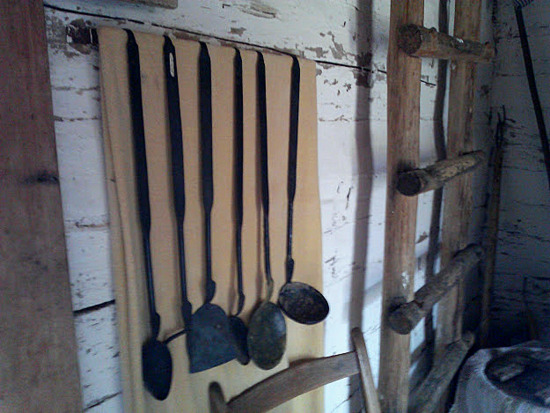 There was plenty more to see, but after touring the log house, I was ready to go back home and start sewing a quilt or adding a stone fireplace to my townhouse, well, make that a fake one, anyway.

It did confirm my decision to go with faux stone wall in my still-in-process basement. Needless to say, I was glad I had brought my camera phone and felt very inspired by the log cabin design for sure.

I hope you enjoyed a peek of a 19th century rural American log house. Please check out Part3- The Homestead at Land Between the Lakes where we continue on to the work shop and farm portions of the The Homeplace tour, and perhaps, inadvertently crash a wedding…

Hope you are having a great day ~ Amy