Are you growing seeds this season? How are yours coming along? My seed growing outcome thus far is both good and bad. While I hope your’s is better than mine, if it isn’t, don’t give up. And I won’t either.

Welcome to Start with a Seed part 5. I’ve got a success-and-failure seed growing update from all of the seeds I started indoors back in February. Last I left off in Start with a Seed part 4, I had organized and started sowing seeds for my flower garden areas. One thing I’ll say is, that I’m so glad I didn’t sow all the seeds at once and that I used plant markers because, boy, can it get confusing. 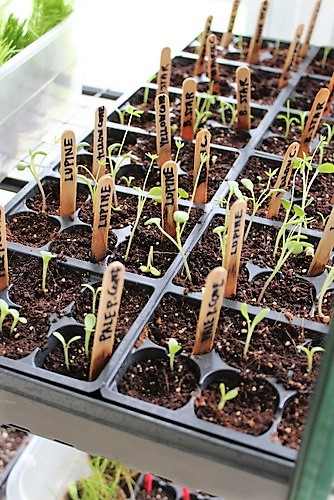 Anyhow, it has been two months since I’ve actually started started growing my garden from seed indoors. While I’ve had some success, I’ve had some failures, as well.

While almost all of my seeds germinated and started sprouting, they did not all survive. Wah wah wahhh.

It’s like I was jumping for joy one minute, shouting, “Hey, I’m actually growing my own garden from seed!”

To then seeing leaves start a-shriveling and seedlings start a-drooping…ugh!! (To clarify, this was not all on the same day. It took several days to weeks to watch them slowly die off.)

Now there could be a few explanations for this. 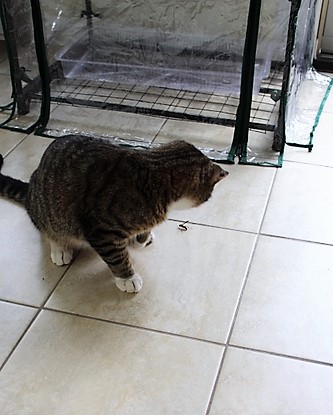 Somebody’s a little preoccupied with a bee (instead of my seedlings).

1) I was having a heck of a time keeping the kittens away, as any cat owner would have warned me. First the cats kept jumping up and plopping right onto the tops of the seeds trays that I had placed on a table in the sun porch. So, I had to move all the plants from the sun porch which had lots of light, into the laundry room which is lacking lots of light.

While the plants were on the floor in the laundry room, they started to get “leggy”, aka reaching for any light they can find, which in this case was from the window above the laundry room floor.

This process weakens them, or so I have read. 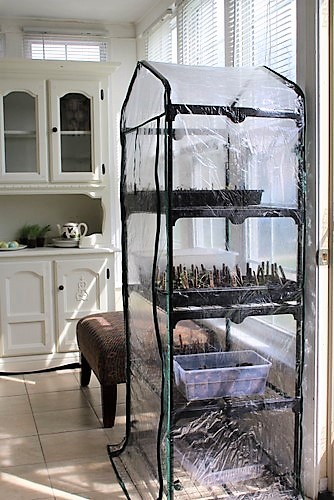 To resolve this whole issue, I went out and purchased a mini green house for around $30.

I got that set up in the sun porch, which motivated my new sun porch furniture layout. 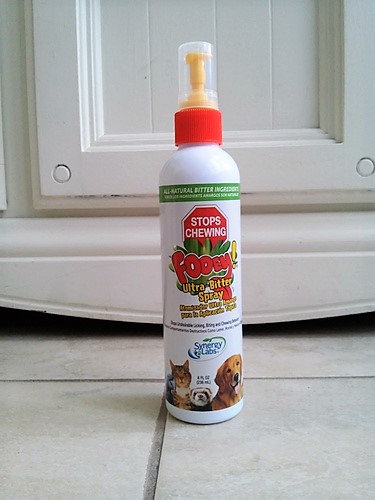 And to try and cat-proof the green house, I sprayed it vehemently along the zipper openings with a product I found called Fooey Ultra Bitter Spray (claims to be all natural and safe for animals).

It worked GREAT for keeping the kittens away. However, I did get some of this on my hands, and consequently in my mouth. Yuck!! If you happen to try it, beware and wash your hands at least twice after touching anything that touched the Fooey. Like the label says, it’s ultra bitter.

Once I put up the green house and spritzed the spray, I was positive the kittens would start scaling the sides of the green house. I mean the thing looks like a giant cat toy to me. 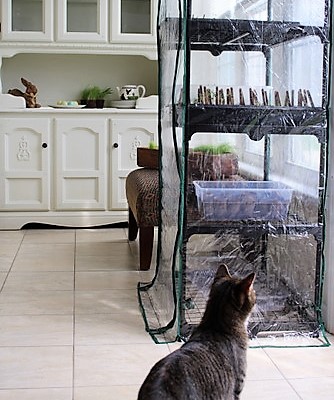 But as the hours passed, and then the days, they more or less stayed away. They did sniff around a little but then they seemed rather uninterested and have been so ever since. I can’t say the Fooey is what did it. It could be that the green house is enclosed and therefore, less interesting. But between the green house and the bitter spray solution, the challenge of the cats laying on top of and crushing my seedlings problem has been resolved.

Of course reasons 2,3,4 and 5 for my partial seedling fail could be

2) That I started the plants, too soon. 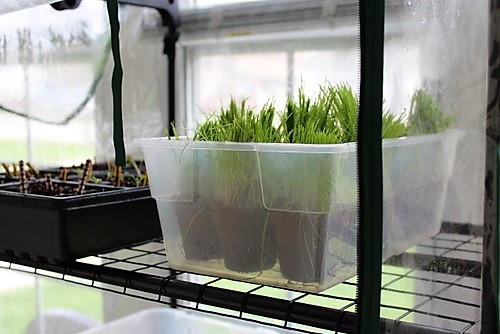 So the plan right now and moving forward is to

1) Start growing more plants from seed in the green house. This was why I didn’t want to sow them all at once.

2) Transplant (into larger containers) and harden off ( put them outside during the day) the plants that have survived.

3) Start sowing some of the remaining seeds outdoors (in the next few weeks, once I’m sure we won’t get another frost).

Maybe this is why when you buy a pack of seeds, you get 200 seeds and only end up with about 10 good plants from each packet….probably not, but I’m going to run with that for the moment.

I do have a few seedlings from a variety of the plants that are thriving. I’ve already been hardening them off outside. I’m keeping my fingers crossed.

I’ve also learned a thing or two about growing native grasses from seed and I’ll share my findings soon, (hopefully to report a success.) 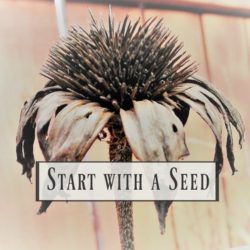 Follow along on the Start with a Seed Series:

Part 3 – How to read seed packs