May you have fair winds and following seas…If you missed the Taste of New England Tour Part 1, you can read it, here. Welcome to Part 2 where my son and I have just arrived in Portland, Maine after sight seeing through the White Mountains. 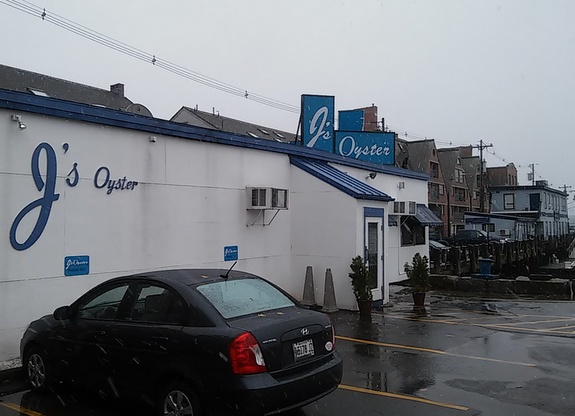 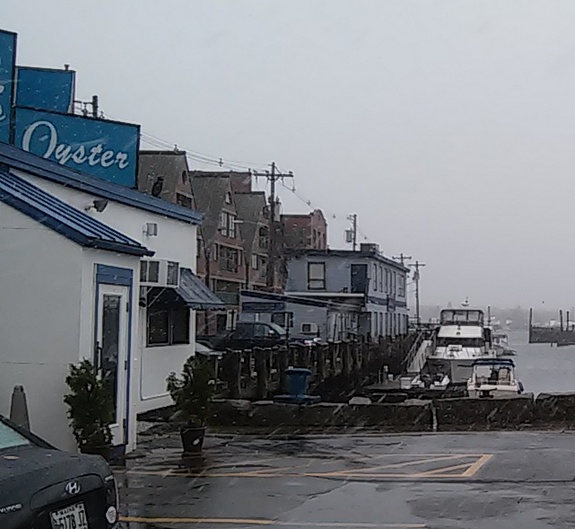 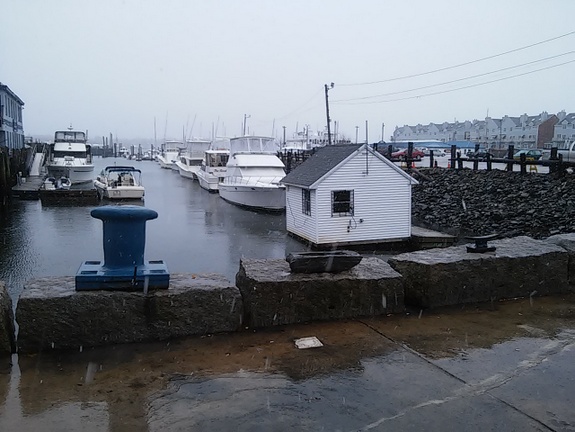 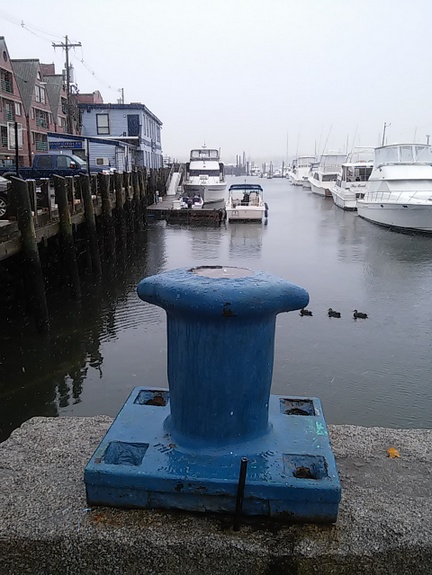 (This was about as close as I got to the Atlantic Ocean on the trip. #ILovetheCoast)

We had worked up an appetite, and Kevin was hankering to try one of New England’s signature dishes, but not just from any restaurant!! Nestled right up to the Atlantic Ocean was J’s Oyster, home of the lobster roll extraordinaire, or so he’d been told. 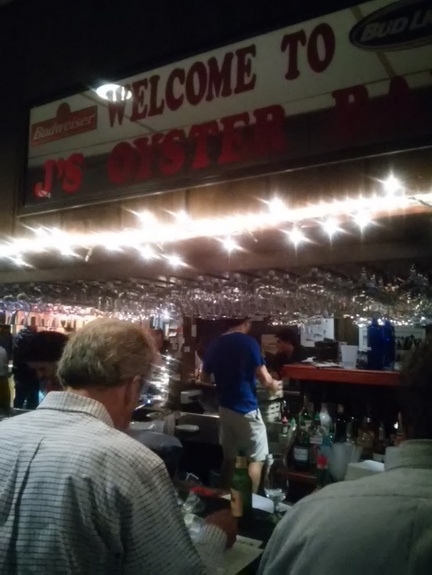 Leave your trendy at the door, folks, because J’s Oyster doesn’t do trendy and doesn’t need to. It’s all about the seafood at J’s. After all, the restaurant is practically floating on the water as it is. This was a quintessential seaside fish house with exactly the kind of food and atmosphere you would expect. 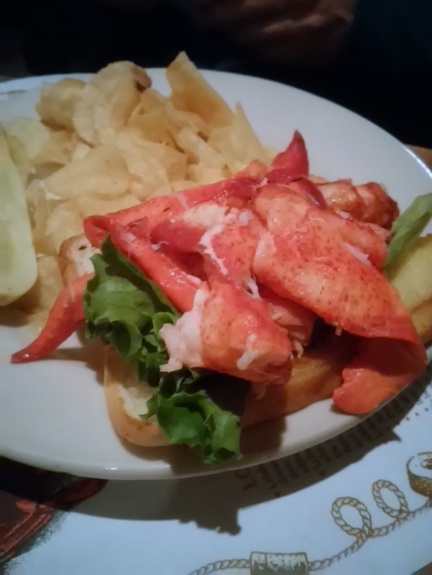 Now, of course, Kevin ordered the lobster roll, which is basically fresh lobster meat already pulled from the shell (pretty convenient if you ask me).

A lobster roll is traditionally served on a hot dog bun and that is how it is served at J’s.

I went with the ever faithful fish and chips. An ideal choice for the not-so-keen-on-eating-lobster kind of person.

We had a window seat, rather than sitting at the bar like one of the regulars. Being rookies, of course we also didn’t order a dozen fresh oysters, but no doubt, this bar has seen it’s fair share of shucking. 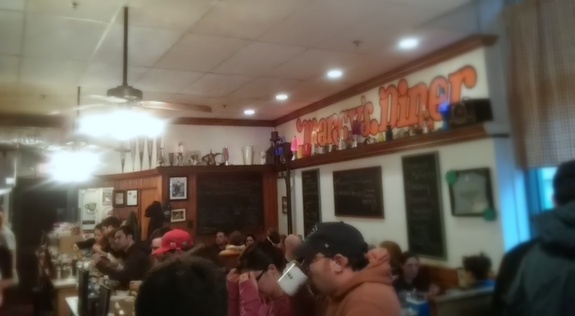 The next morning we hit a hipster little spot called Marcy’s Diner. 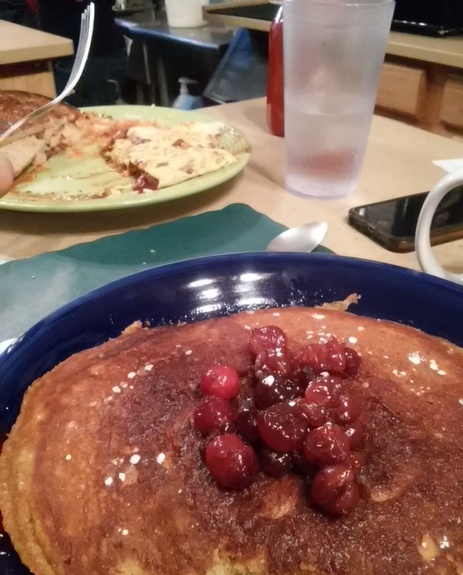 Specialty: Grilled, homemade muffins, as in, cut in half and tossed on the griddle.

Kevin’s pick:  Chili and cheese omelet, as in the kind of chili that comes out of a can and the kind of cheese you might put over nachos…yep, in an omelet.

Check, check and check, we tried them all. We even shared these three between us because there was just no way either one of us was passing up any of these rockstar dishes.

A&K rating: 4 thumbs up for Marci’s, great prices, unique dishes and the un-hip are welcome ;D 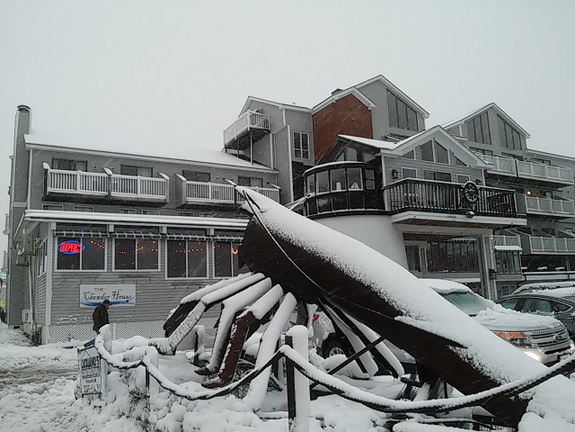 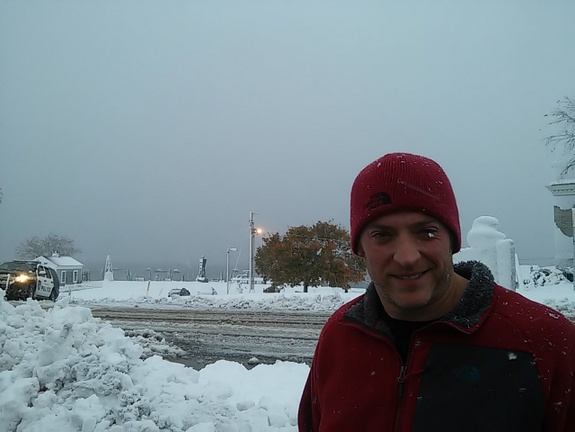 (Just for reference, the date was only November 2nd)

We headed up the coast for northern Maine from there, only to get stuck in a snow storm (don’t ask) and were thrilled when we saw that The Chowder House in Rockland was open and serving food. We had driven for about 40 miles and NOTHING was open. 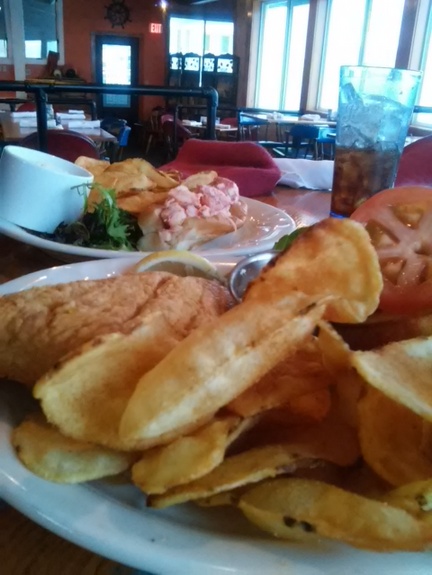 (These were the puffiest chips I had ever had! Mmmm)

The most hospitable gentleman seated us, took our order and quickly brought us out a lobster roll for Kev and a fish and chips for moi. It was kind of a deja vu meal. Kevin and I briefly considered ordering the exact same thing for all of our meals in Maine. I think by then, the drive through all the snow had gone to our heads.

Why did we drive towards upper Maine, when we knew the snow was coming, you ask?

In Chicago, the threat of a few inches of snow doesn’t usually stop most of us from making plans. Naively, Kevin and I thought, “Hey, it’s only a few inches. No big deal.”

What we realize now is that the Chicago area is considerably flat. Maine on the other hand is not considerably flat. Therefore, you’re not just dealing with the snow on the ground, but you’re dealing with gravity pulling you down the slanting road through the snow on the ground. We saw so many cars that had run off the road. As we passed, we made sure they were okay and waiting for a tow, but we were white knuckling the drive the whole time.

Back at The Chowder House, our meal really hit the spot as did the proprietor’s travel advice:  “Go back from whence you came and now!!” As it turned out, upper Maine was hit with 8 or so inches of snow that weekend.

A&K rating: 4 Frozen Thumbs up, priced just right, a beacon of hospitality along the coast

We gladly took his advice and by night fall, we were sitting comfortably in a booth at Durgin Park Market. The second oldest bar/restaurant in Boston. A snow-free Boston, I might add.

* Kevin did go back up through Maine, after I flew home, and here are a few shots from his hike near Acadia National Park: 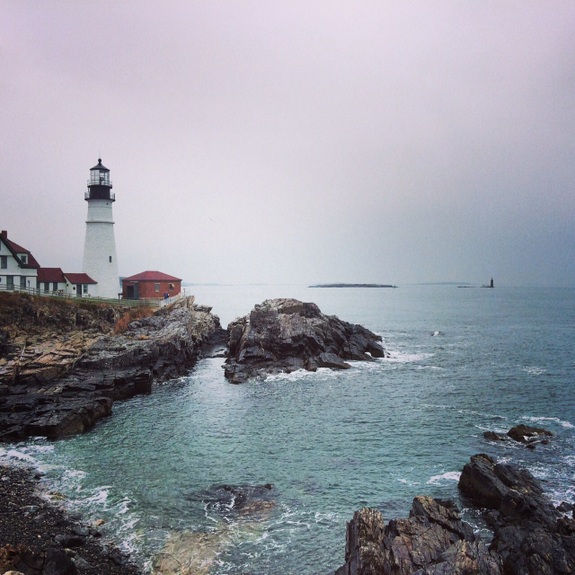 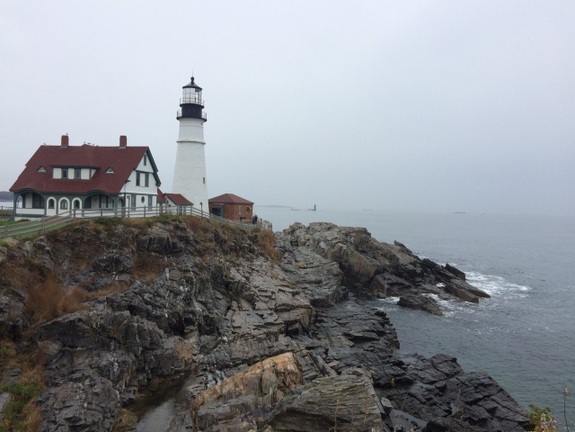 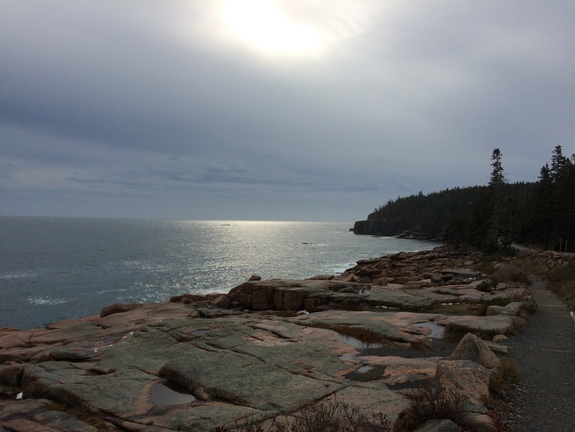 You can see all of the New England trip, here. 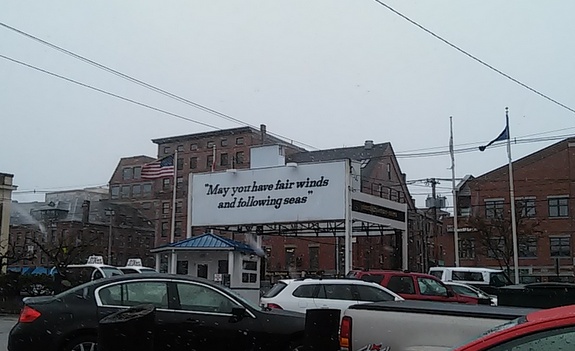 Until then, may YOU have fair winds and following seas…