From our very first meal on our trip to New England, my son and I knew we were in for some good eats! Ever since Kevin was just a little kid and we’d be on vacation, we would always try to eat at the local diners or ask around for where to go for some good and real food. This taste of New England tour is no exception. 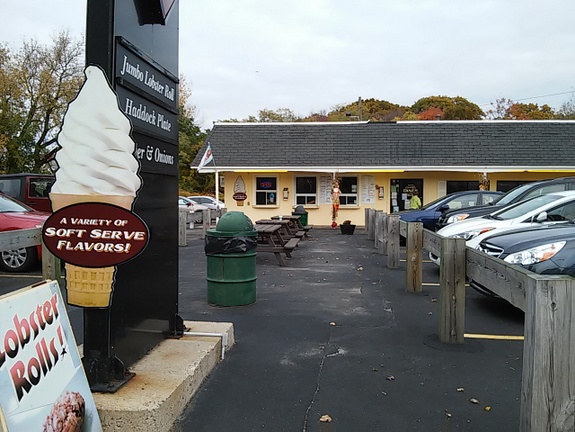 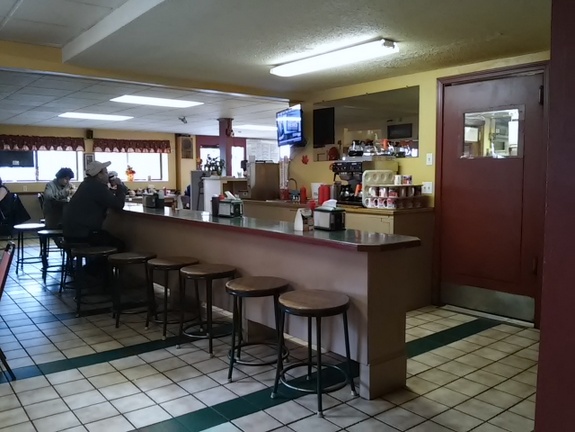 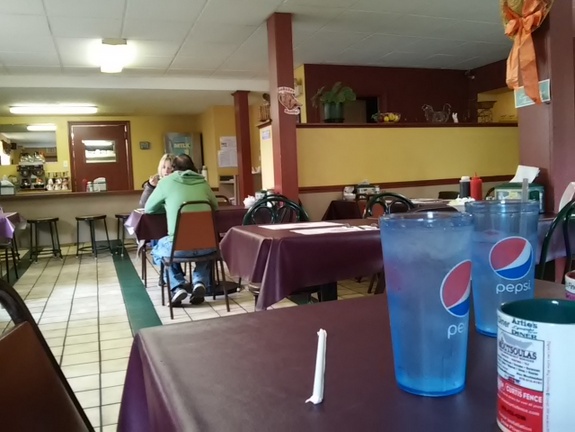 Our first stop was Artie’s Lynnfield Street Diner, just outside of Salem, Massachusetts.

A cute, but good sized, traditional diner, I was glad to find out. Decorated brightly with gold and red New England colors, it was very cozy and the staff was nice as could be.

Kevin ordered the Portuguese omelet with potatoes, and he was very impressed. What makes an omelet Portuguese, you ask? The linguica, that is what! Linguica is a Portuguese sausage seasoned with garlic and paprika. Did you know that there were a lot of Portuguese people who immigrated to New England? Nor did I, but they have certainly influenced the flavor of New England.

Kevin said that linguica was spicy, but not overly spicy, and that both the omelet and the potatoes had a nice smoky paprika flavor that he would qualify as comfort food with a kick. 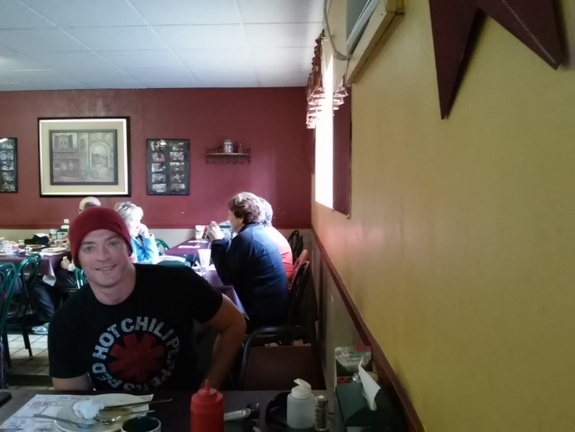 Here he is smiling because he loved his breakfast so much. Okay, he’s really only smiling for the picture because I told him to, but that doesn’t make the P-omelet any less awesome in his book.

Oh, by the way. I had the 2 eggs over-easy, bacon and a short stack. It was delish.

The A&K rating:  5 Stars, the prices are a steal, the people very real.

We went on to Salem, MA and then to America’s Stonehenge from there and we were of to Vermont by late afternoon. 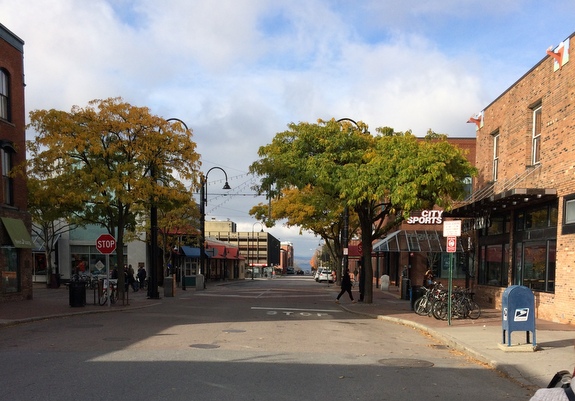 (If you follow this road straight ahead it takes you right to Lake Champlain and there’s a mountain range just beyond the lake. It was a gorgeous view, but unfortunately I didn’t get any other shots.)

We reached Burlington, Vermont by sundown and we were HUNGRY.

There were quite a few restaurants along our walk through the town square.

Funniest to us Chicagoan’s was that each place we stopped at was a pizza place??? We just couldn’t do pizza for our first New England dinner, (we have pizza joints on almost every corner in Chicagoland) so we settle on a bar serving bar-type food.

We saw even more pizza places the next day and we almost caved. Hopefully one of these days I’ll get to try pizza-a-la-Vermont.

We did meet a nice couple at the bar serving bar-type food, though.

And they suggested we eat at Penny Cluse for breakfast. Thanks for the tip cool couple! 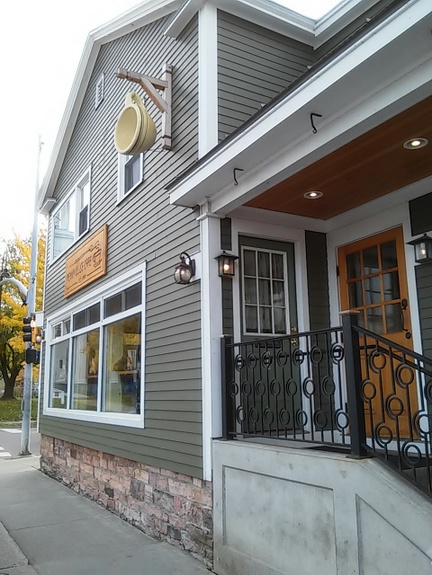 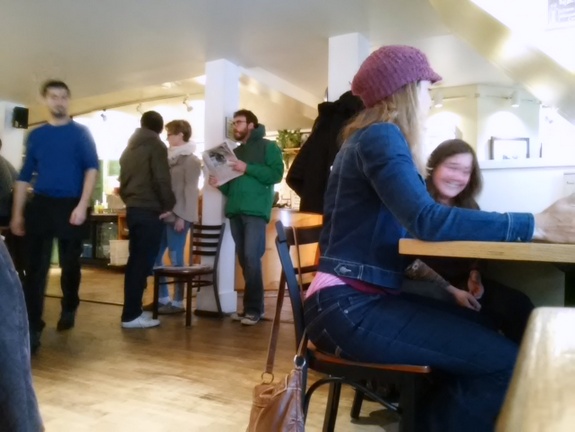 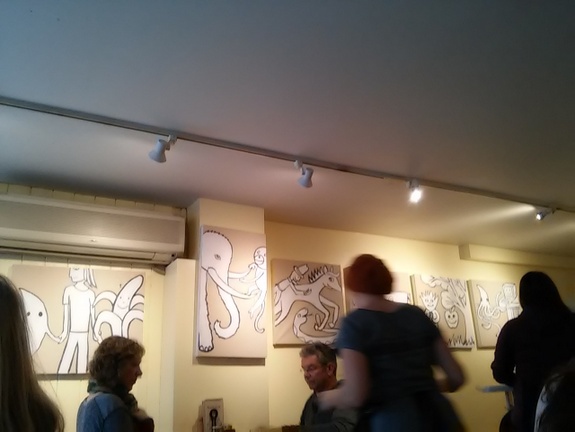 Penny Cluse Cafe was trendy, oh yeah. Look at the mix of old building and new hip artwork and all around cool people (it’s only natural that a cool couple would know where the cool people eat).

And where all the cool bathrooms are… 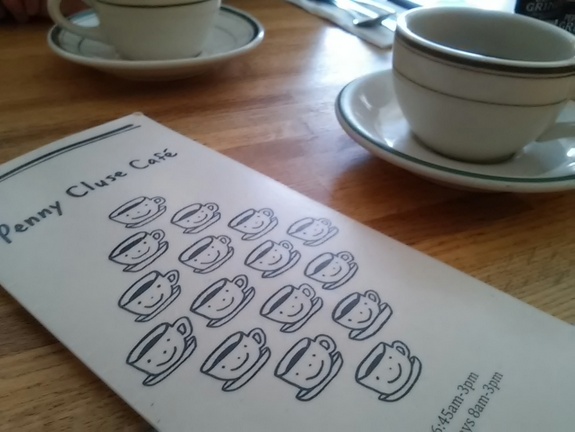 I particularly loved how they stamped their bathroom walls with their logo!! What better place to go decor bold and risky than in a restaurant bathroom. I hope that won’t be misinterpreted ;-}

At Penny Cluse, Kevin ordered the fish tacos with a side of pollock. Have you ever had a side of fish?? Neither have I, but he was exceptionally pleased with the whole meal, so who am I to question. 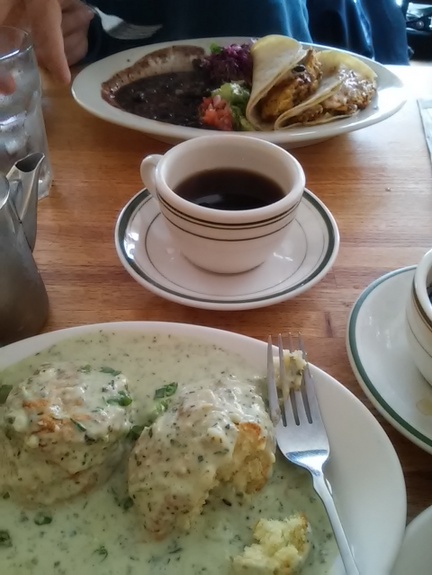 Now I got a little daring and ordered the biscuits and gravy which were pesto based, thus the green gravy. I’m normally a rather boring eater but I just can’t begin to tell you just how good the b&g’s were!!! I think the photo says it all. 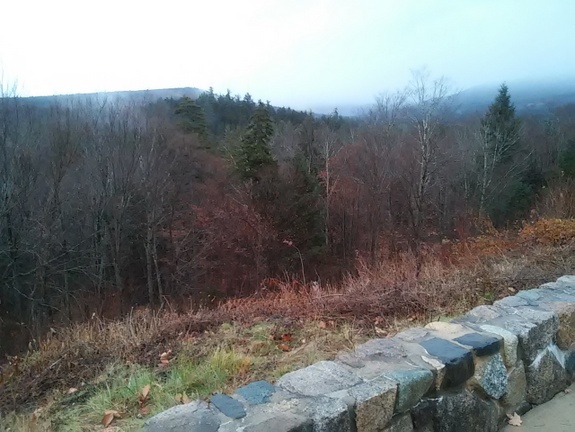 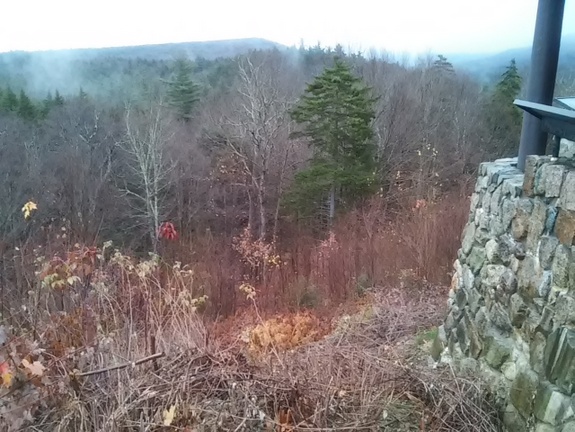 From there we headed off to do some hiking in the beautiful mountains of Vermont. Unfortunately, but the time we made it to our hiking point, a dusting of snow started to fall and we decided not to risk it. 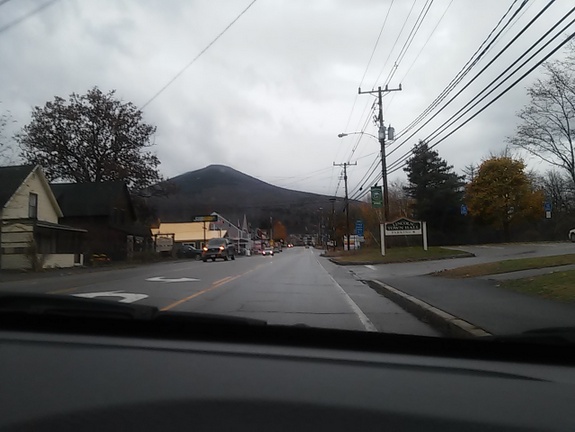 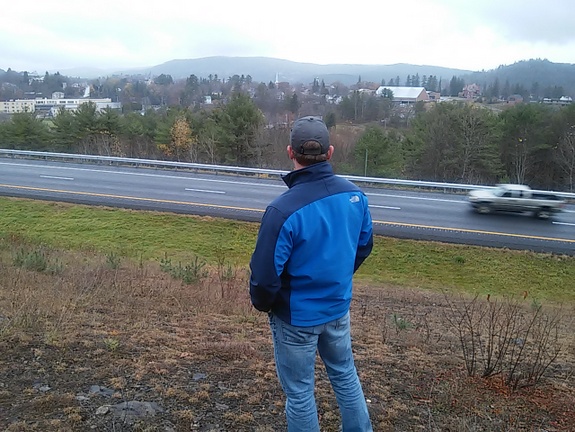 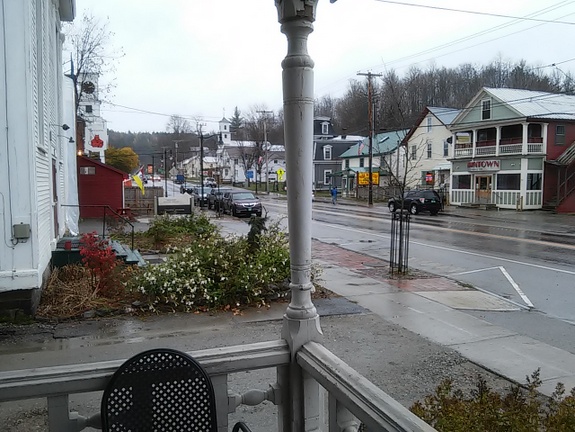 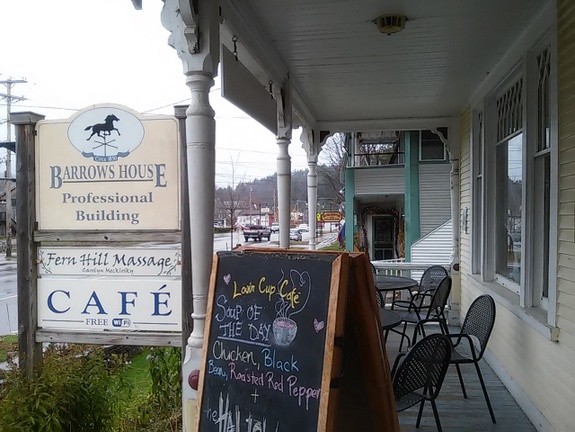 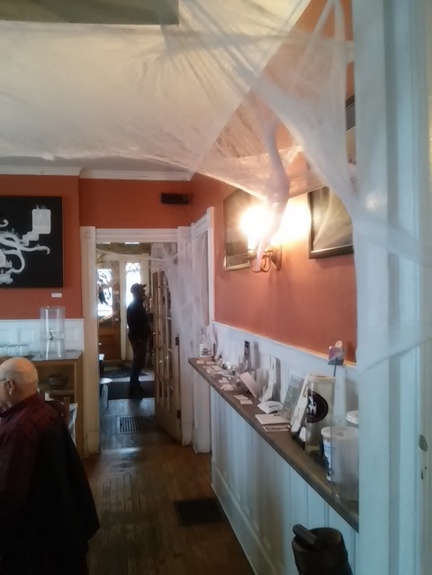 Lunch was in order by then and we found this quaint little cafe, The Lovin Cup. Located inside an old Victorian style house it was a delight to enter and even more of a delight to find that they baked their own breads and desserts.

We both ordered the turkey and cranberry sandwich which was soooo good. It had me longing for Thanksgiving left overs. 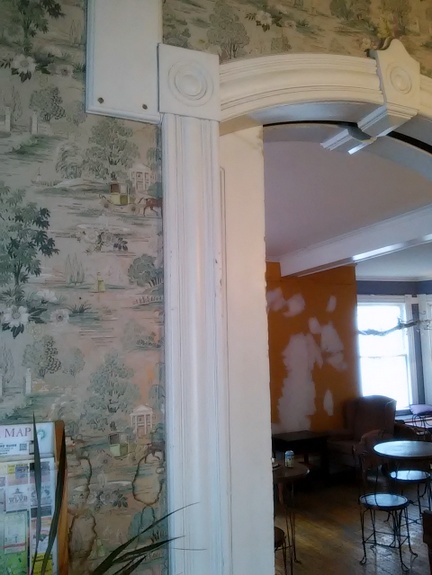 We sat in what appeared to be at one time a parlor. It was quite and peaceful at first. Just lovely. I was really admiring the vintage toile wall paper in the entry hall. 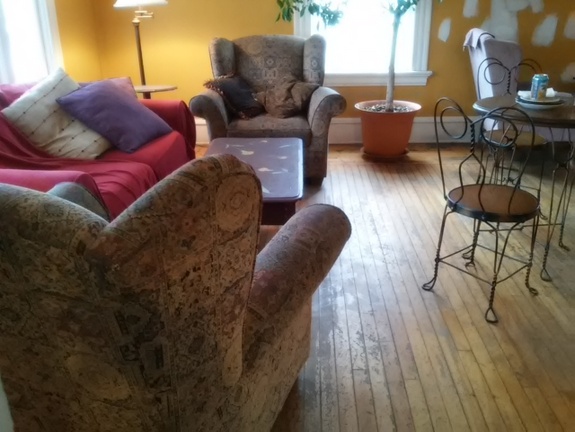 Anyway, there was just one other group of folks having lunch in the parlor. A small group actually, only two people. A couple most likely, because as Kevin and I sat peacefully enjoying our lunch, the “couple” at the other table began to…break up??

Let’s just say there was a lot of huffing, whimpering and polite slamming of fists on the table… on her part. And a lot of consoling, patronizing and soothing gestures happening on his….”it’s not you, it’s me…”

Drama has never scared me away from a good dessert in the past and it didn’t that afternoon, either. The homemade apple pie was to die for!!!…or to break up by!? 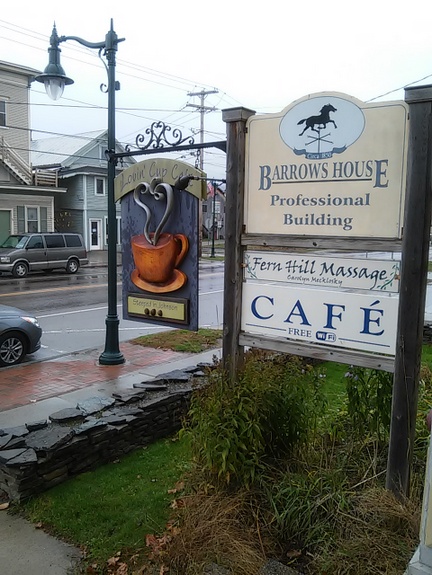 As we left, Kevin couldn’t help himself, he had to comment, saying, “seems like The Lovin Cup Cafe probably wasn’t quite as lovin today as it is on most other days…”

**In truth every stop along the way on our New England trip was filled with amazing food, gorgeous sites and the friendliest of people. I would go back tomorrow, if I had the chance.

Stay tuned for part 2 of taste of New England, check out the rest of the New England trip, here.