You know those buckets that you get at the driving range, filled to the brim with golf balls that you can drive, slice, and even putt away at without ever having to get the golf ball into the hole? Those buckets are often plastic these days, but once upon a time they were tin or metal. I wanted to make a tin bucket lamp shade, and I had those old buckets in mind for my plan. My golfing experience extends only as far as the driving range but I do have friends, who love to actually golf. One in particular came to mind when I came upon a stacked golf ball lamp while out shopping for the mix and match dish set at the Goodwill. I swapped it up quick because I know that I would want to salvage it. 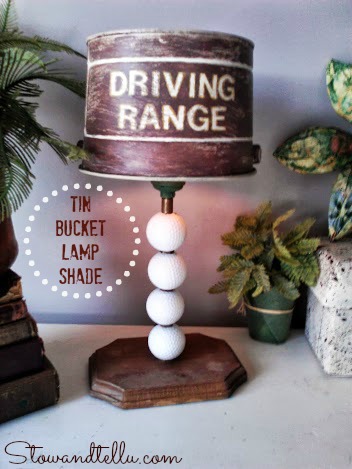 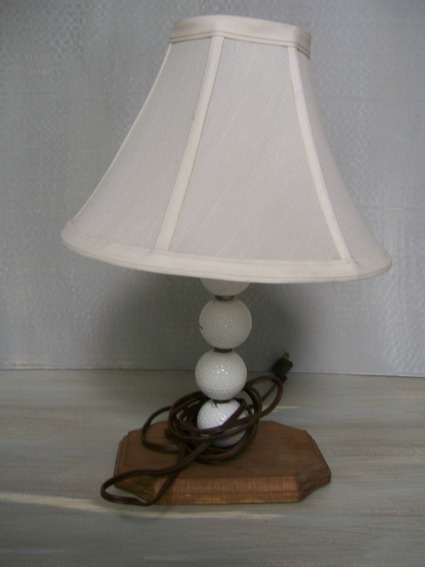 The lamp was hiding under a very unflattering and disproportionate lamp shade. I knew that shade wouldn’t do, and I had just the right shade in my inventory by way of a garage sale purchased tin bucket. More so, however, I knew that my friend, Wayne (who loves to golf,) could use a lamp like this to cheer him up. 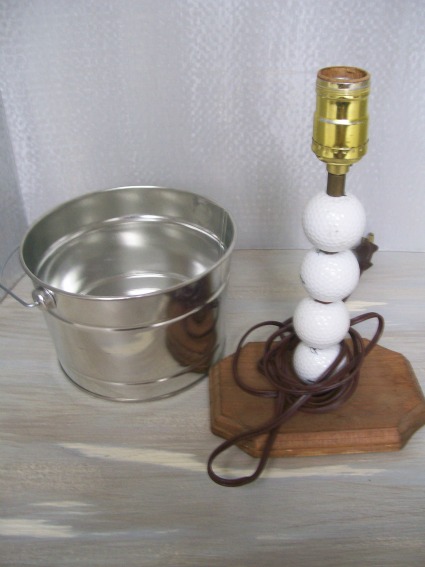 You see, it was just around the time that he and his family had woken up to two feet of water in their home in the middle of the night. The Chicago area had been doused with flooding rains. Wayne and his family lived right near a creek that crested, spilling water throughout the neighborhood. They lost just about everything they owned. Wayne is a hard working guy, who is willing to help out anyone, at anytime. Why bad things always happen to good people, I’ll never know. He and his family have since recovered the essentials with the help of friends, family and co-workers, but I was thinking a little something special was in order, so this project is for him. I’m calling it a tin bucket golf lamp shade, rather than lamp, since I merely salvaged the lamp, but did not make it. One could probably fashion a tin bucket lamp shade to most any style of lamp. Here is how I made this one:

Lamp shade frame, (that has the round framing at the top (and is compatible with your lamp base.)

Note:  You will need to cut the outer part of the frame off, unless you can find one that does not have that section.

Tin snips (to cut the opening in the tin bucket) use “red handled” if right handed, and “green handled” if left handed.

Paint or chip brush (or two) 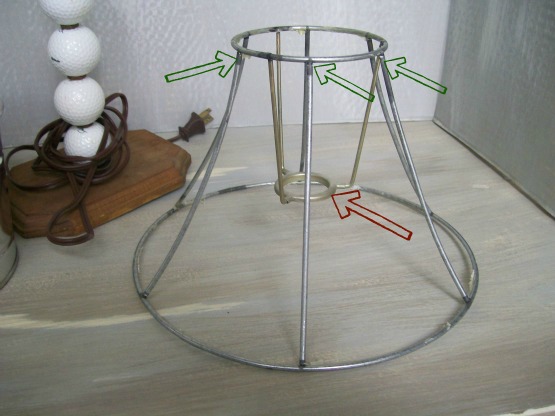 If you have an old lamp shade that you no longer use, and the framing is correct for this project, then rip off the fabric to re-use the frame. I used the one the came with from the thrift store, but I did have to cut off the outer frame with a Dremmel tool and cutting disc.

Unfortunately I do not have pictures for this step, but the green arrows show where to cut off the outer part of the frame with the Dremmel tool. The red arrow shows the center part, the section you want to keep and use. 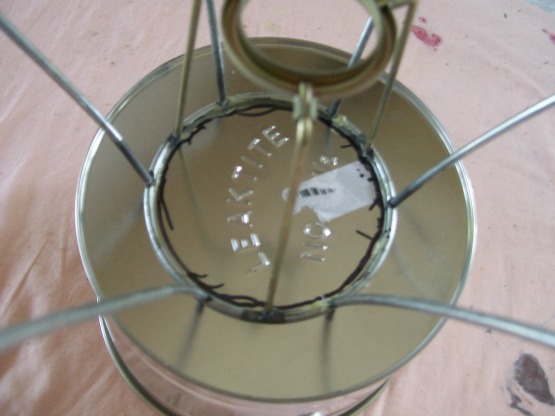 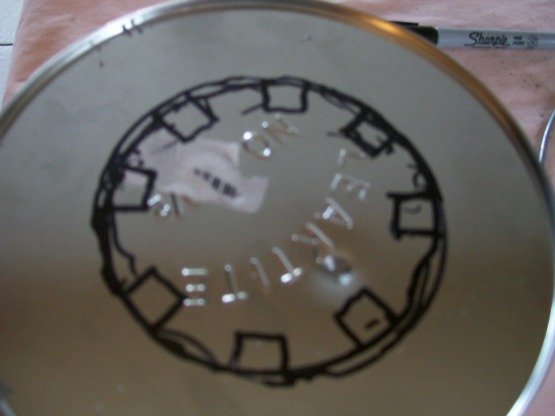 Start by laying and centering the top part of the lamp shade frame onto the bottom of the bucket. Mark the outside with a black marker. Draw a smaller circle on the inside and draw lines to create tabs. My picture shows tab sections missing. ***Don’t follow that drawing, instead mark the same way but only remove the tabs from the points where the vertical frame meets the circular frame on top. 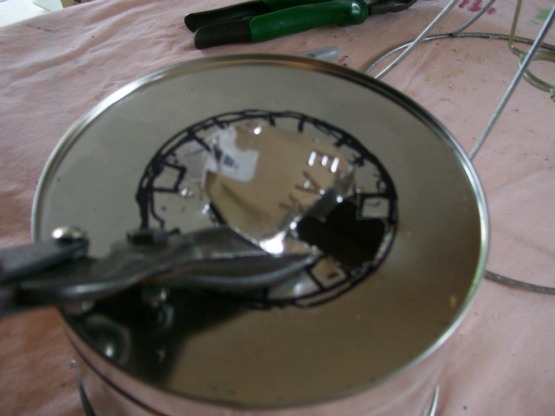 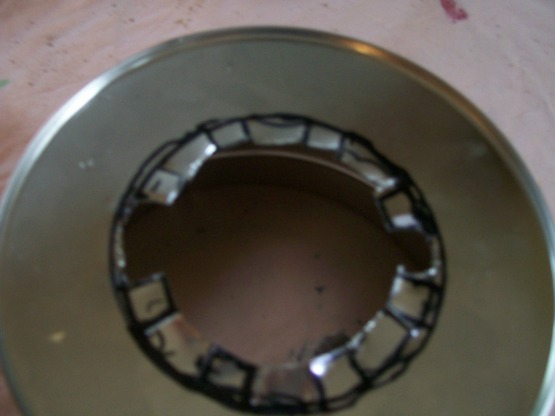 The lamp shade frame with eventually be mounted inside the bucket, and the tabs will wrap inward around the frame to secure. 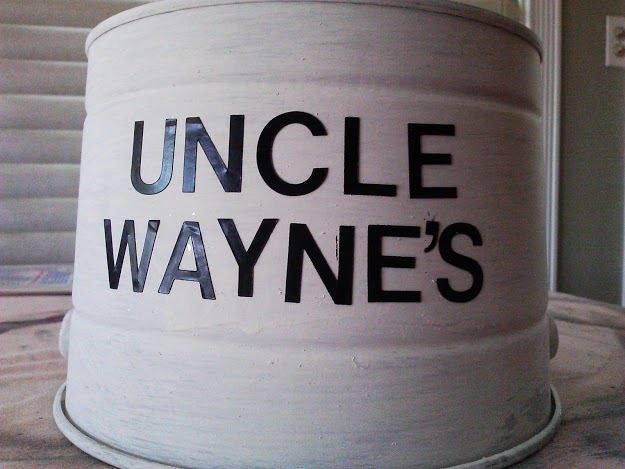 I painted the outside of bucket a base coat of off white and then applied vinyl letters. I centered to wording by placing the middle letter of the odd lettered word, directly at the center point, and then worked outwards. I centered the even lettered word by finding the center of the half of the bucket and placing one letter on either side of that point and then worked outwards. I also wrapped and tied a piece of string around each of the two diverts in the bucket. 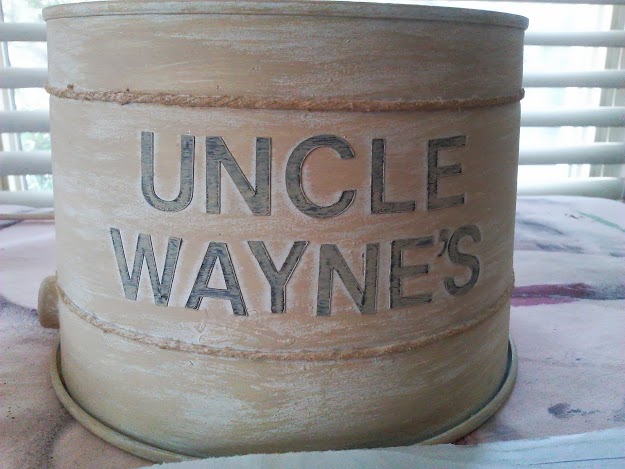 Next I painted on coat of pale yellow, using a dry brush method and let dry.

Tip: at this point I should have also painted the inside of the bucket.

Then a coat of cinnamon brown craft paint, using a dry brush method, and making sure not to give it full coverage, so there was some pale yellow paint showing throw. 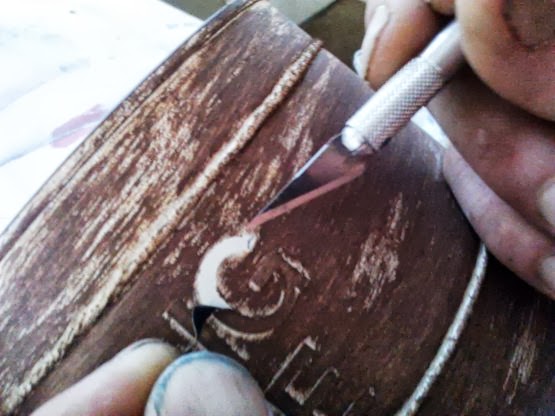 I let that dry a bit, and then with a straight edge, pulled off the vinyl letters. 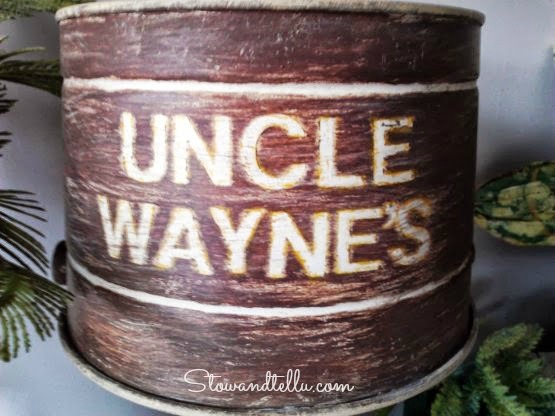 Then using the thin craft paint brush and yellow ochre paint, I dry brushed the edges of the lettering to give it accent.

Uncle Wayne is his nick name, because though he is a father, he became an uncle five times in a matter of four years. His favorite golfing range way back when was located within our local forest preserve, so I wanted this to look a bit like a forest preserve sign. 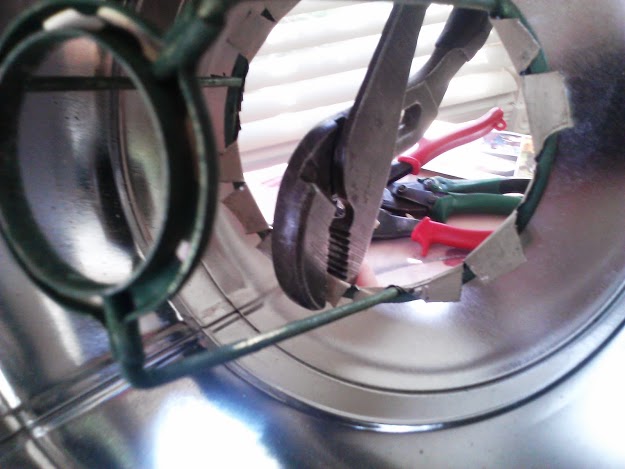 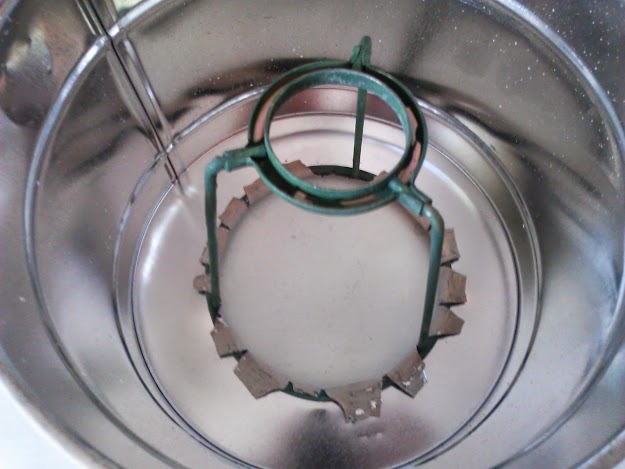 This is how the frame/ bucket  should look when completely attached. 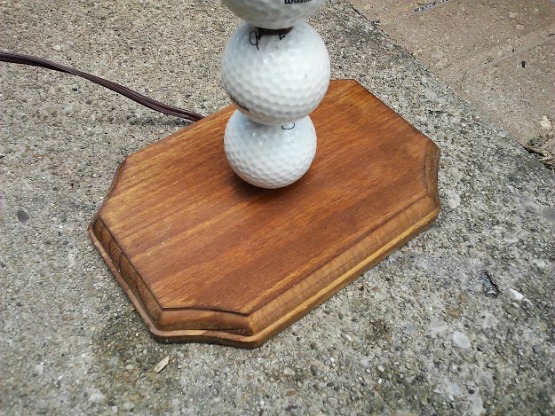 Did you notice how the wooden base is drab and dry? And now how it is fresh and bright? Click here if you want to see the tip I used to shine up this wooden base from my friend Laura at Inspiration for Moms. 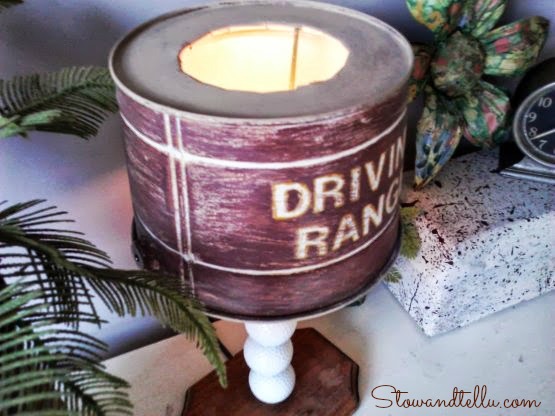 Wayne and his family have since moved back in their home. I can’t wait to stop by and bring him this little treasure. I’m really hoping he likes it and I hope he has a chance to get out for a game of golf soon, too! 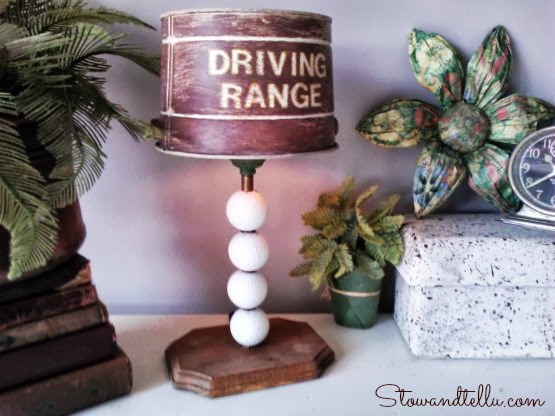 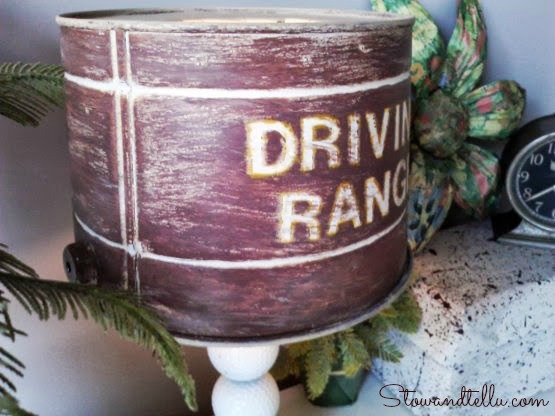 Although this isn’t the easiest project, it’s not that hard, either. If you have any questions on making one of these shades, please drop me an email, I’ll be happy to answer any questions on the steps.

Obviously, this tin bucket lamp shade has a golfers theme, but one could be made in any style for any room. I’m thinking that I’ll be making more of these in the near future.

You may also like: DIY Hat Box Lamp Shade