Did I mention that my husband was once a boy scout? Just after Thanksgiving, we had a microwave malfunction. This was not in the kitchen update  plan, yet it quickly became the plan because, well…dinner is often, though unfortunately made up of microwave meals! So if we wanted to a hot have dinner on one of the many non-cooking nights,  we had to do something. Our original microwave sat on the counter, taking up space. I had been wanting an under cabinet mounted one, but didn’t really want to splurge since we may be moving in the near future. 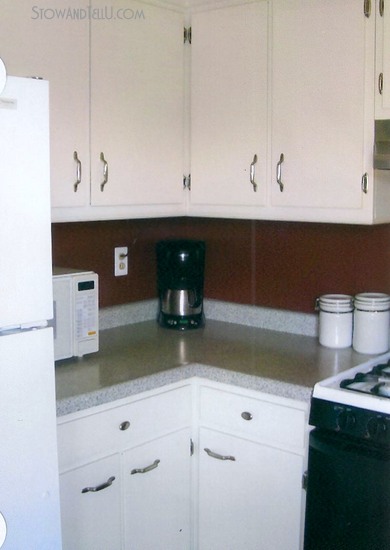 We found a used one for $60 that was clean and working ~ sold!! It had all it’s parts and pieces, so Ken set off to installing it, only to find out that our cabinet above the stove was too long. This would have made the bottom of the microwave fall to about 12 inches above the stove. “No can do!” said he.

“It would not be to code, nor would it be safe, not to mention we wouldn’t even be able to see the stove to cook.”

At this point we needed either a new cabinet, or we had to salvage the current cabinet by modifying it. The obvious choice for me was to just make this cabinet shorter. I mean, how hard could that be?

To Ken, this was not so obvious and not so easy. Not only was he once a boy scout, but he was the type of scout that won every award, earned every badge, and completed every boy scout task… appropriately… and with purpose!

If boy-scout Ken is going to do a project, there has got to be several days of research. “Can this be done? What’s the best way to do it? What are the pros and cons? Which way is cheaper…?”

He reads pages and pages of comments from others on how-to forums on the web. He covers EVERY detail, and if after all this, he still thinks it’s possible; then and only then does he make a plan and proceed.

Once he is in process, he goes about it methodically and each step is done to near perfection. If you’ve seen the over-the-sink-shelf, then you know what I mean. He is very skilled and get’s it done right the first time.

If there is any catch at all the benefits of boy-scout Ken’s talent it would be that he likes to talk about the project A LOT, and I meant a WHOLOTTA!!

He’ ll tell you what type of screws he used, how many drill holes he made, what the impact resistance is on the screw that he decided not to use, and why it has that kind of impact… I just made that last part up, but do you get what I mean?

And so, it was that very process that we went thru somewhere from the time the original microwave cooked it’s last frozen dinner to just after Christmas, when my son was home and could help him get the new-but-used one installed. 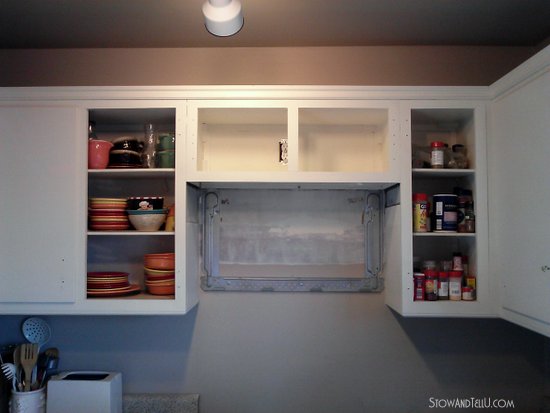 His modified cabinet was completed and in all honesty stronger, leaner, meaner and straighter than it’s counter parts.

Below are a few shots of Ken and my son installing the microwave. 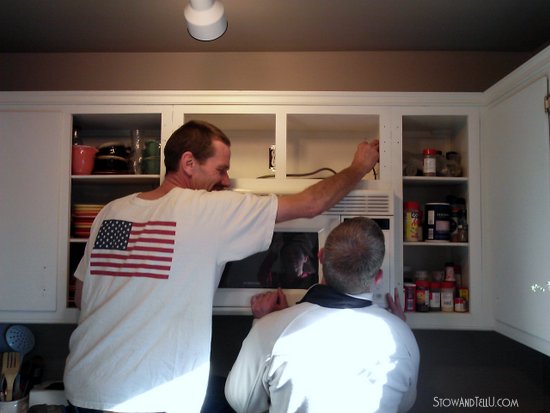 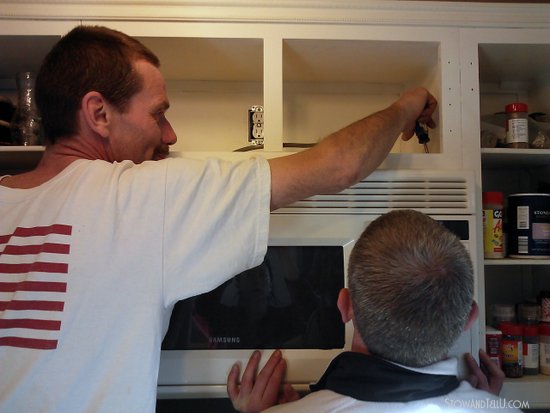 Notice how Ken seems to be talking?

Below is another of my son supporting the microwave with his shoulder, while Ken continues the install. 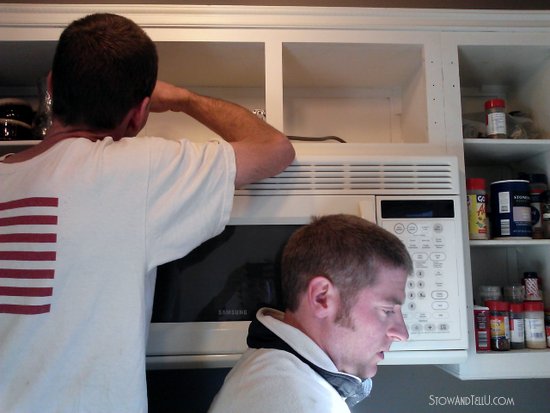 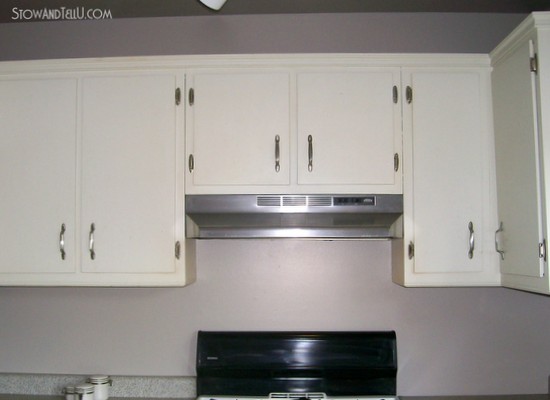 Above is the before shot

(Pardon the grease and grime, that’s did get cleaned and repainted before the installation) 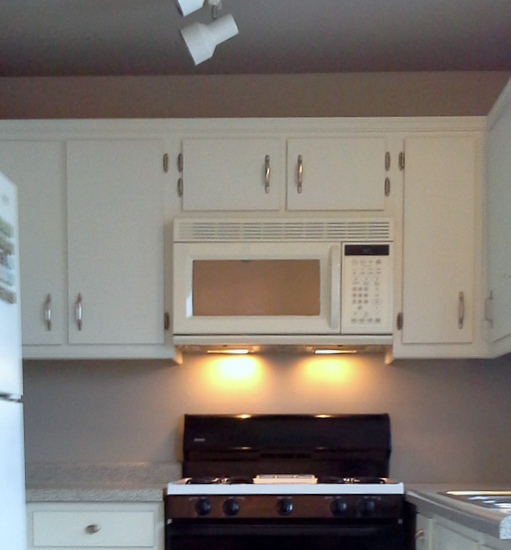 This photo is after the cabinet was completed and the microwave installed.

To notice the difference from one to the other, look at the handle placement on the cabinet for both the before and after pictures.

(I apologize for the bad photos. I was using a few different cameras during this process.)

It all worked out in the end, and all in good fun. We will be gaining some counter top space, which is spare enough as it is and,  I couldn’t be more thrilled and grateful to have a such a handy, once-was-a-boy-scout husband.

Ken could not find a tutorial online showing ” how to shorten” a cabinet, so this modification was truly his own creation. We should have probably done a tutorial on this, but in all honesty most forums suggested taking the cabinet to a woodworking shop. This probably took him a few days to do. For most people it might be cheaper and easier to just purchase a new one; however for us it was a salvage project worth completing.

Thank you for stopping by ~ Amy