It’s snowing here… right now as a matter of fact. I look outside and everything is covered in white and glisten. I’m not going to break into song, I promise, but I really wanted to capture that snow covered look and bring it inside where it’s much warmer. So I mixed and measured and with a few house hold ingredients, I was able to come up with a texture mix that looks something like… snow covering. 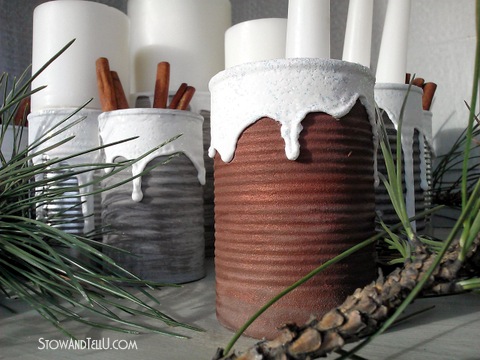 Now that I had the texture down, I wanted to snow cover something that I could use as Christmas decor, for a centerpiece, perhaps. Recently I made some paint dipped soup cans that I shared over at Inspiration Cafe.    A soup can, so simple, right? I guess I like the hint of industrial style in those ridges 😛  Does anyone else see that? Anyway, I figured, why not try and snow cover soup cans. They’ll just end up in the recycling bin.

How to make Snow Covered Texture on Soup Cans:

Stir the following ingredients together until consistency is thick and smooth, kind of like cake frosting. 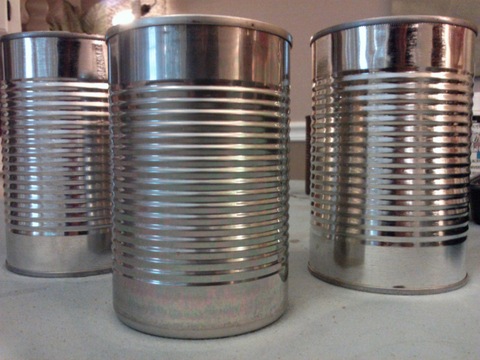 I started off with some soups cans, emptied and with labels removed, of course. 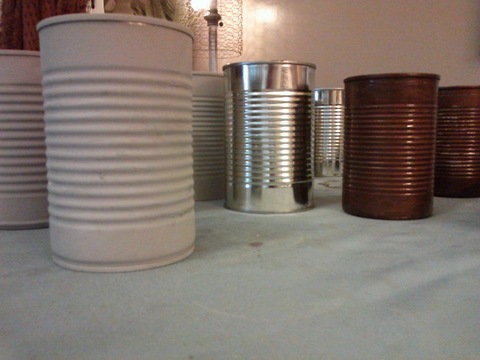 I gave some but not all of the soup cans a few coats of craft paint both plain and metallic.

Tip:  I added a few sprinkles of baking soda into the paint mixture to help the paint stick to the tin cans more easily. 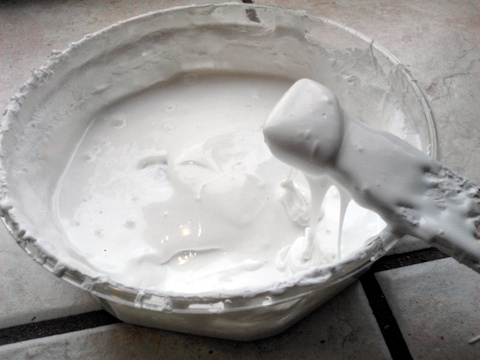 I mixed up the snow covered texture recipe.

To test the thickness, I folded several pieces of cardboard accordion style and then stood them up on their side.

I applied the snow covering to the top side of the cardboard and let it drip to make sure the consistency was to my preference. I let the test samples sit for about half and hour. 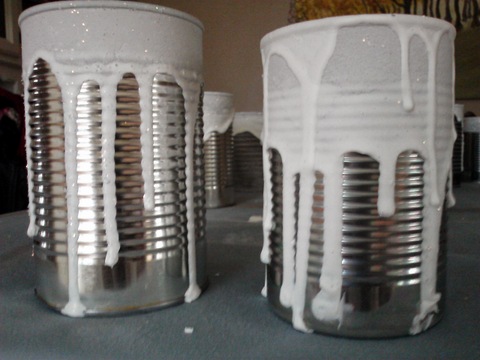 This let me see just how much dripping would occur. I had to adjust the thickness, as my first batch was a bit too thin.

You may like the texture to be thicker and less drippy. If so, add a bit more baking soda, and test again until satisfied. To thin out a bit, add a FEW drops of water or a bit more glue. Stir well. 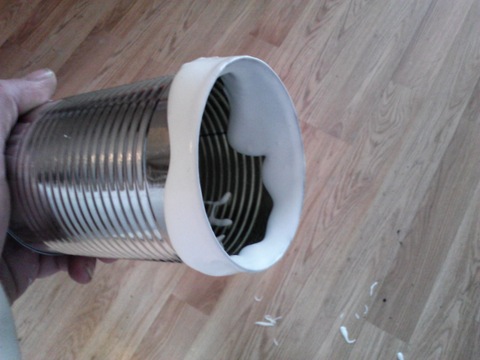 With a sponge craft brush, I then applied a thick coat of the texture to the top of the soup can, allowing it to drip over both the inside and outside edge.

Next I held the can over a plastic bin and shook on a little bit of white glitter. I then placed the cans on a clean surface to dry overnight. 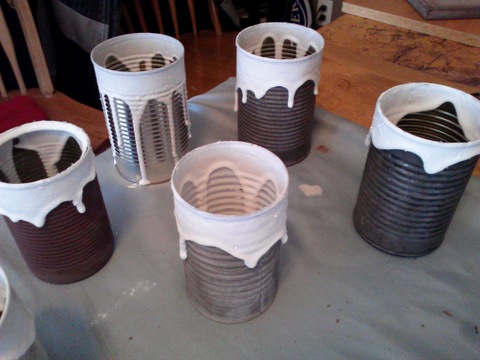 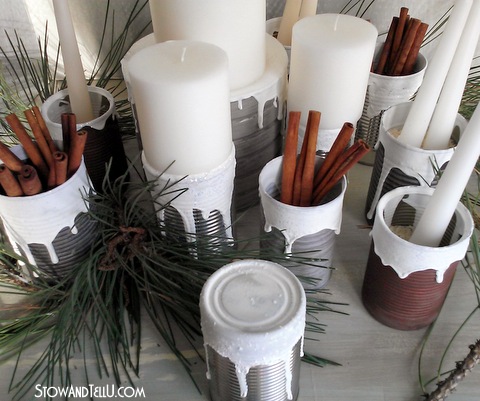 When all said and done, I had plenty enough to make a centerpiece with taper candles and a few other Christmassy tid-bits. 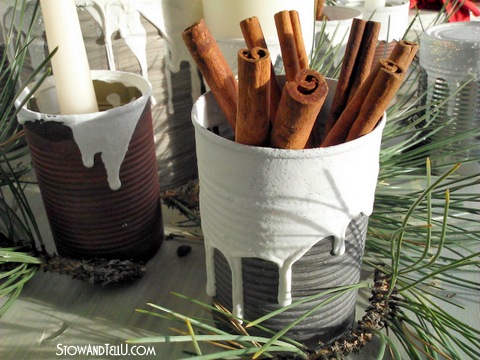 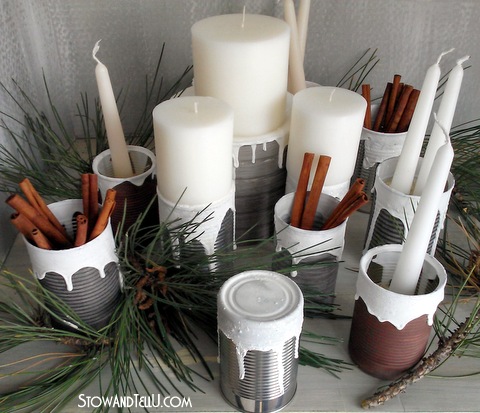 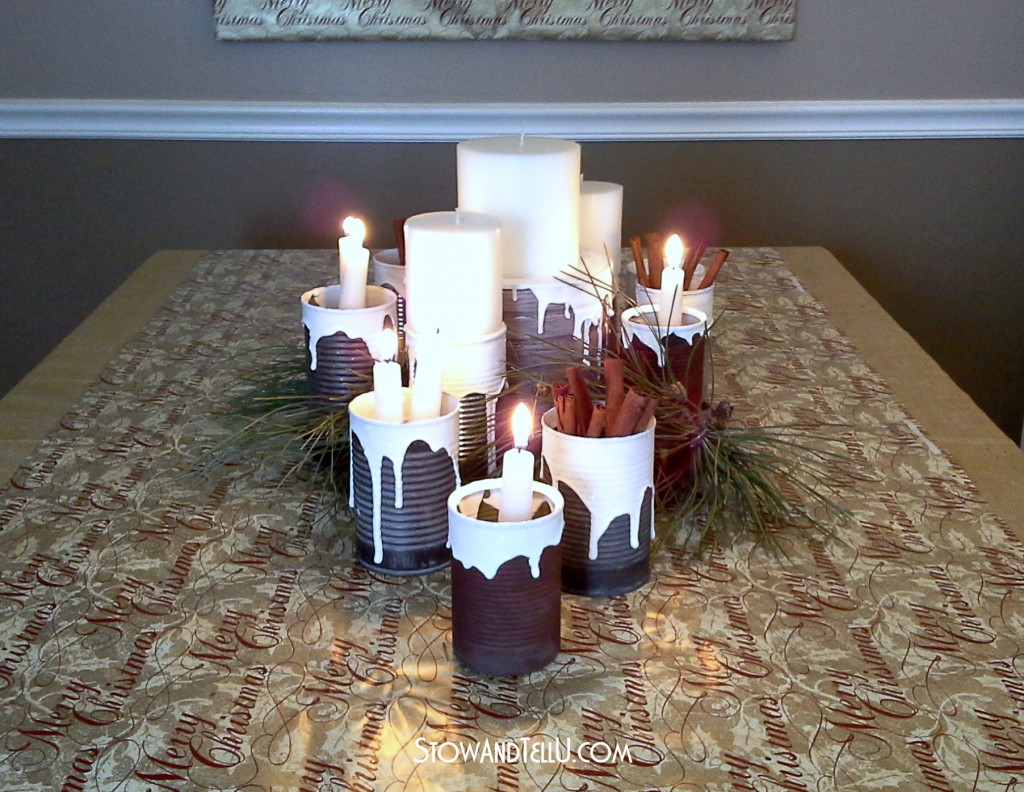 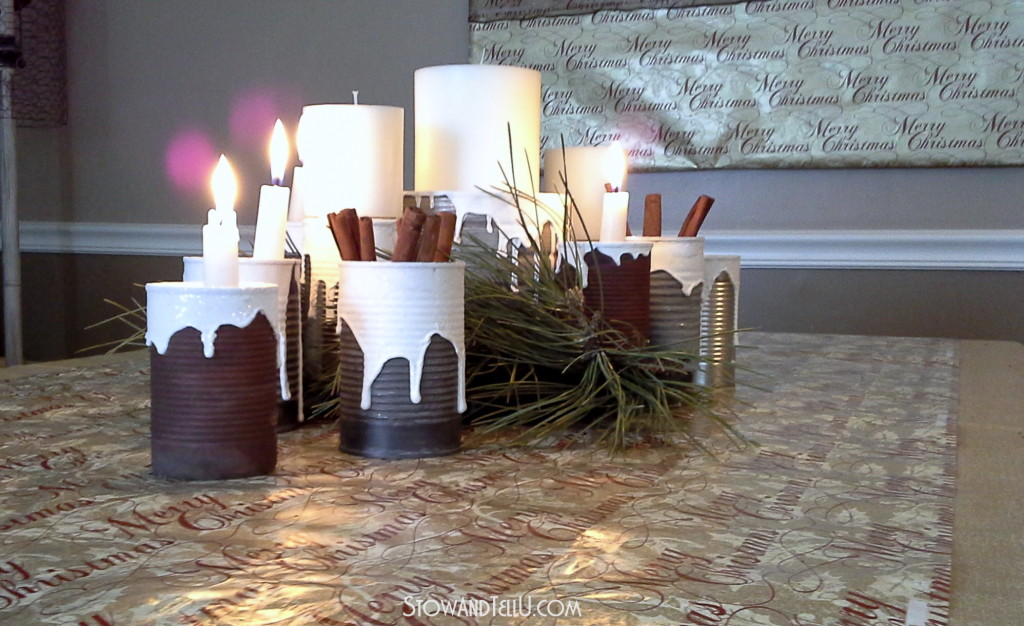 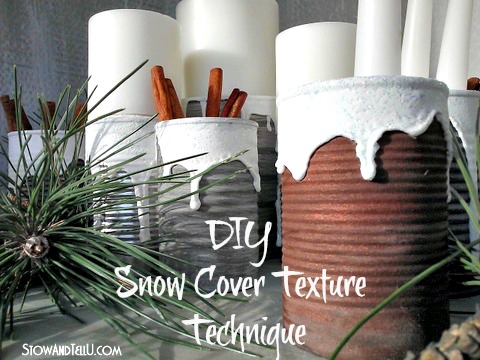 Living in Chicago, you can’t avoid the winter – or the snow! I must admit when the snow starts to fall and cover everything outside, it really is pretty, though just a little bit prettier while still keeping warm~inside.

One could add snow covered texture to just about anything such as an old vase, a basket, a bird house… you name it because all you have to do is mix, apply and let it drip!

Do you have anything laying around the house that might look a tad bit more festive covered in snow? 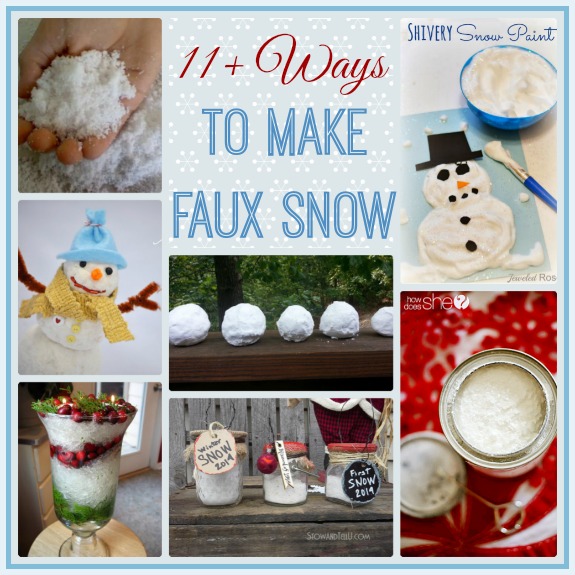 For more Soup Can projects

Thank you for stopping by. I hope your holiday season is going well. ~ Amy

1.3K shares
« She Wouldn’t Have it Any Other Way Keepsake Memorial Ornament
Chicken Wire Christmas Tree-O »