If you’re not a big beer lover, but you’ve got the opportunity to visit a brewery, you may just find it more interesting than you think. I accompanied my son Kevin to several breweries on our trip to New England, and while, Kevin sampled a variety of malts, stouts, ales and pilsners, I strolled the breweries’ gift shops and lobbies finding diy eye candy among the ambiance set by each brewery.

We stopped off at three different breweries.

Each one with it’s own flare for style, branding, and decor, but all pretty juicy with inspiration for game rooms, man caves, gardens, porches and more. 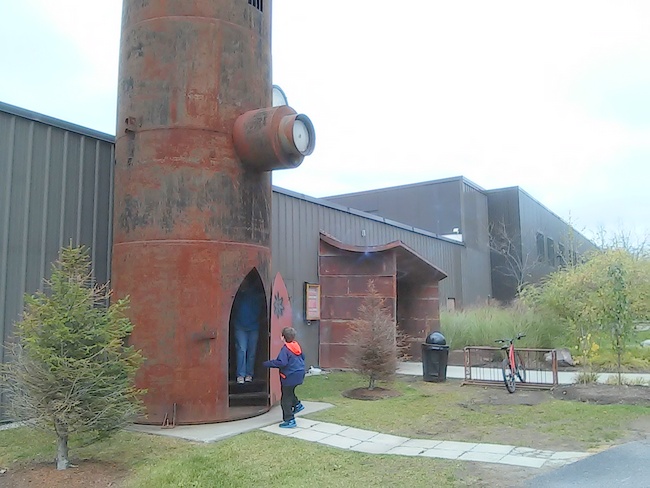 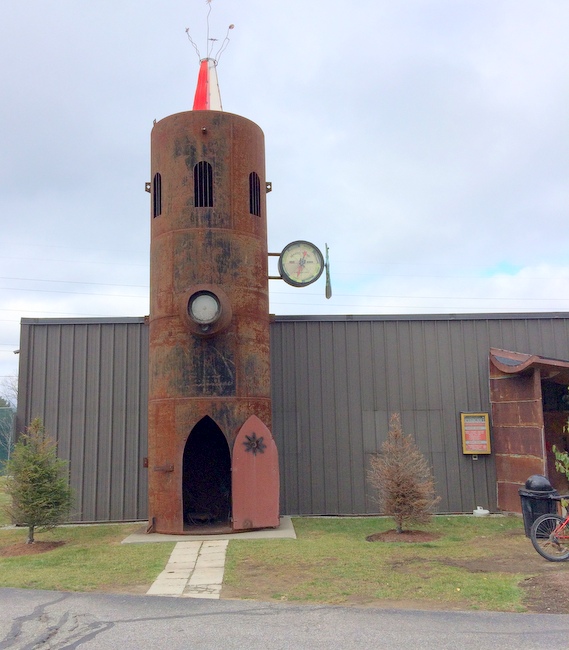 This rusty silo at Magic Hat was sure an attention getter.

There’s a winding staircase inside and you can climb up and look out the arched windows at the top. 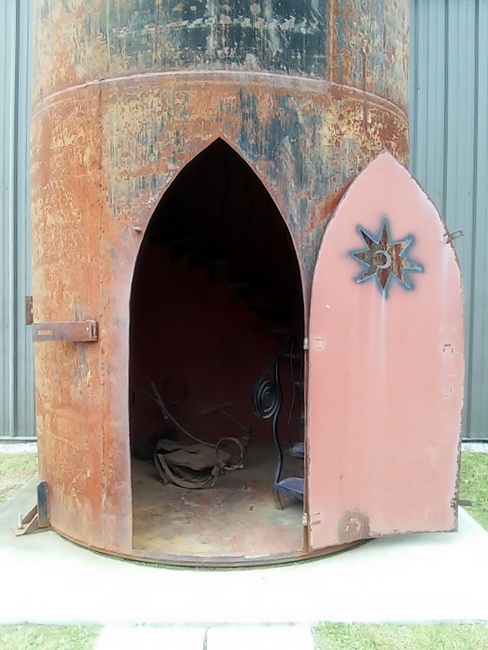 This corrugated metal tubing was used everywhere inside the Magic Hat lobby and gift shop. It was used as cubbies for tee shirts and such, and even as a garbage cans in the bathrooms;) 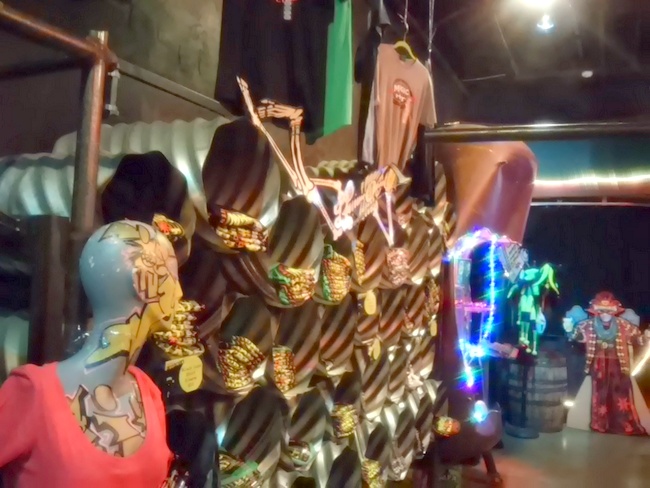 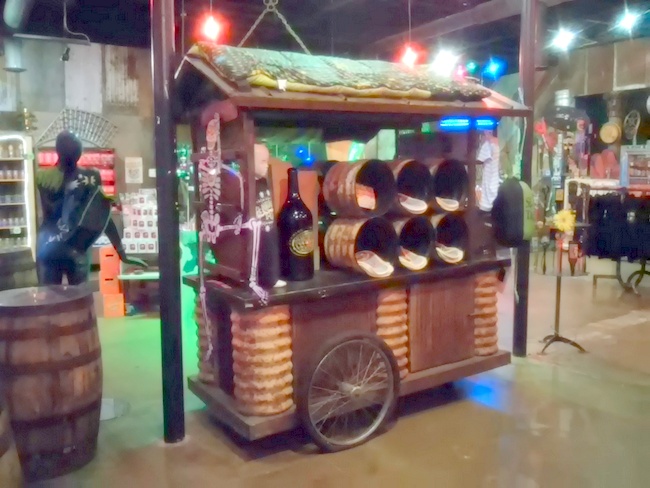 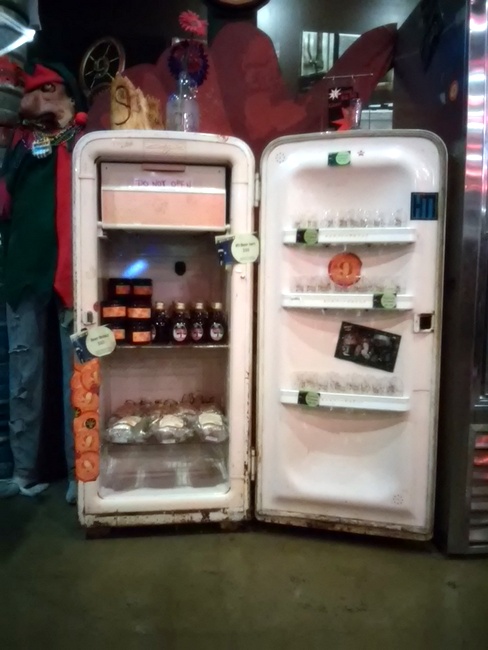 Shot glasses and other sale items donned the inside of this vintage refrigerator. 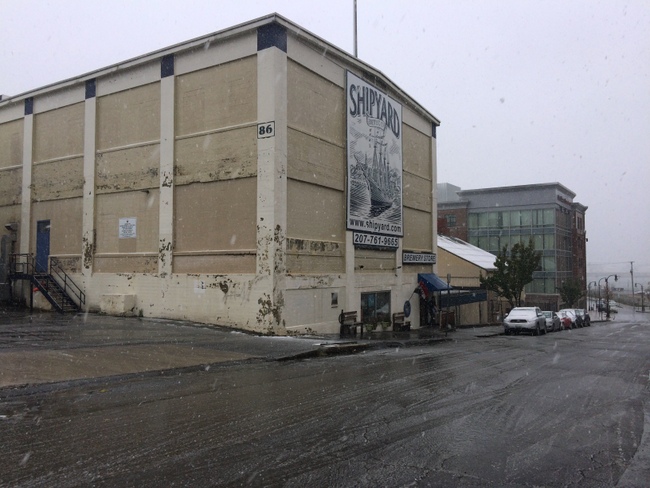 If you look to the far right, I believe that’s the Atlantic Ocean out there.

You may also notice, it’s kinda snowing…(this should have been our clue) we did this tour right before we headed north in Maine and got stuck in that snow storm that I mentioned in part 2 of Taste of New England. 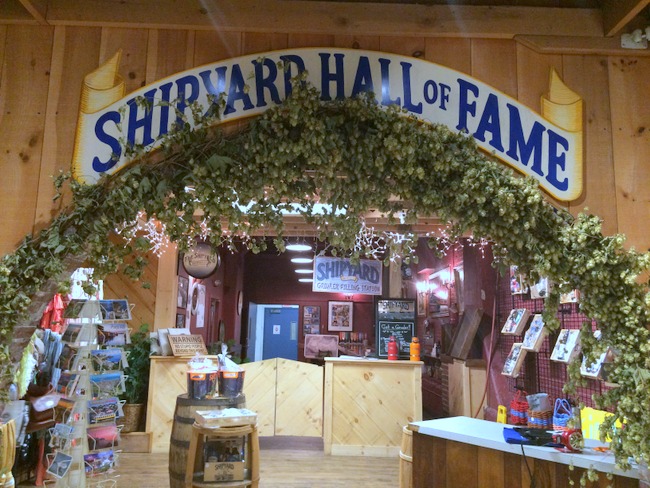 Swag of hopps is the new ivy. 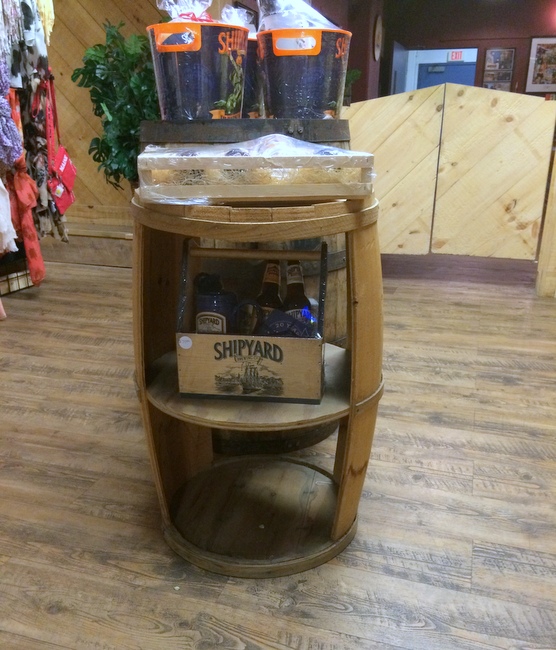 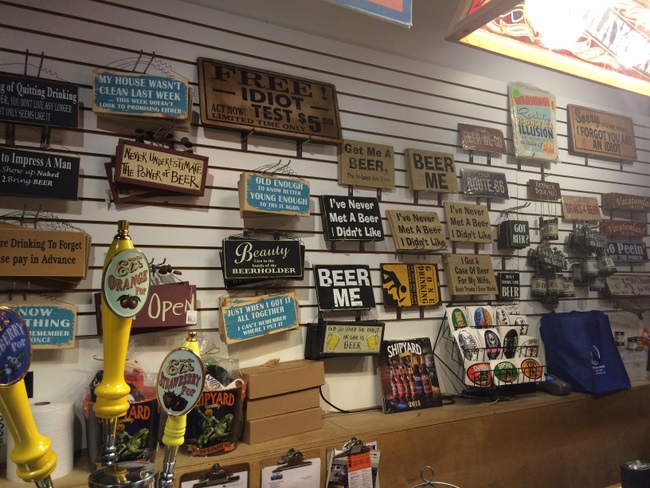 Can you relate to any of these? Mine would be the “free idiot test”. 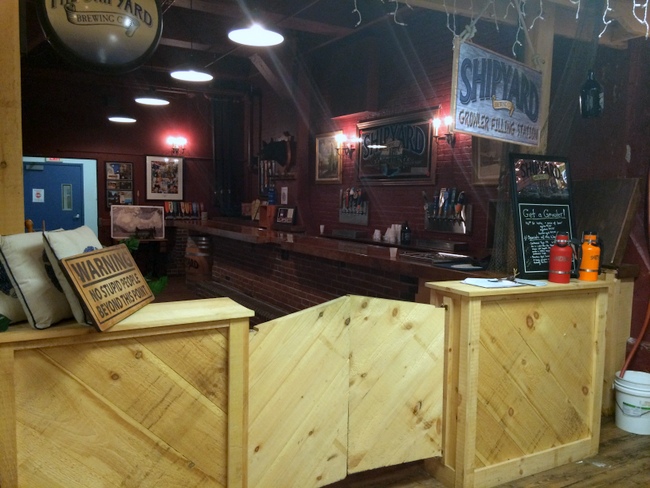 Give it a quick sanding and mehhh, forget the stain… it’s perfect! Now let’s have that beer!

What do you think of this raw wood look? I’m lovin’ it! 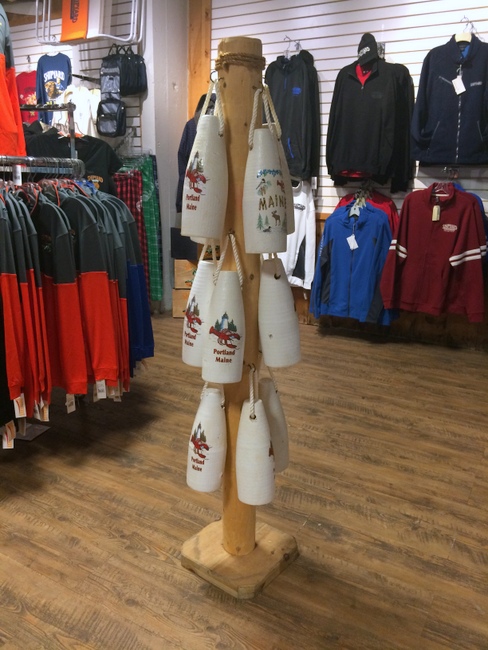 Oh buoy, these are cute!

Shipyard’s brew collection names include words you might here out of a fisherman’s mouth (that aren’t swears):

Sam Adams Brewery is located inside a block long brick building right in the middle of an old Boston neighborhood. 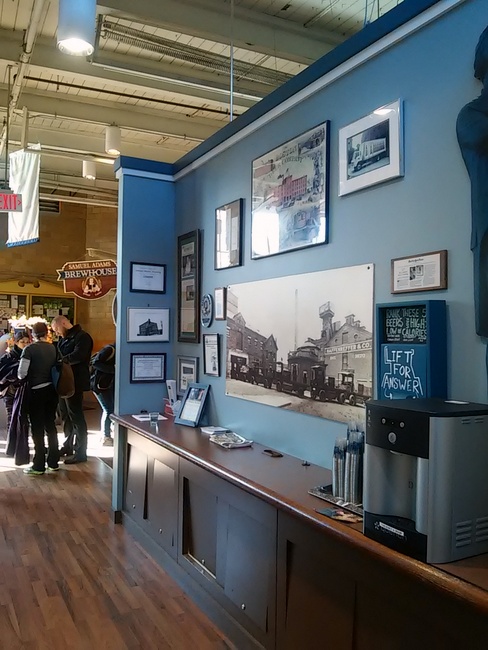 I see some New England color! 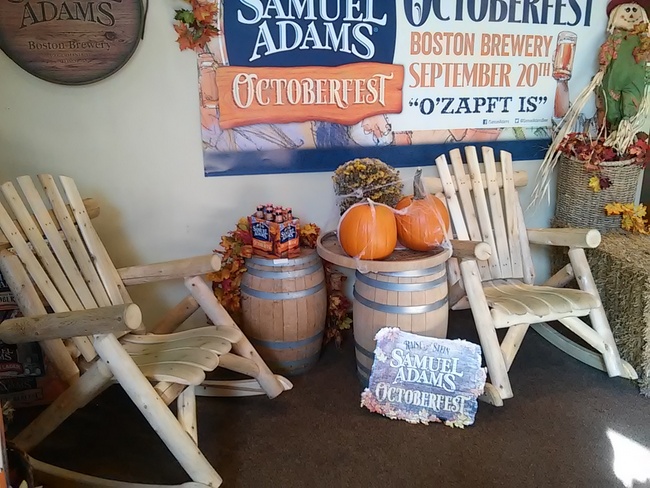 More un-stained, bare wood. It must be a beer drinker thing??!

These adirondacks are fabulous. If I had some of my own, I don’t think I’d let anyone sit on them;) 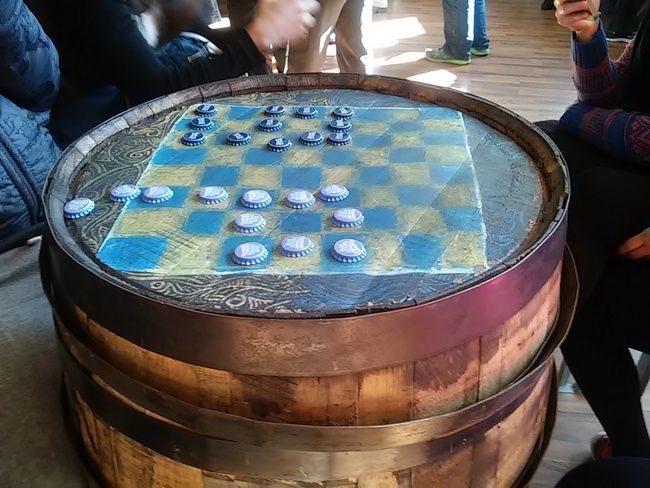 Lot’s of ways to turn up the diy on this idea. 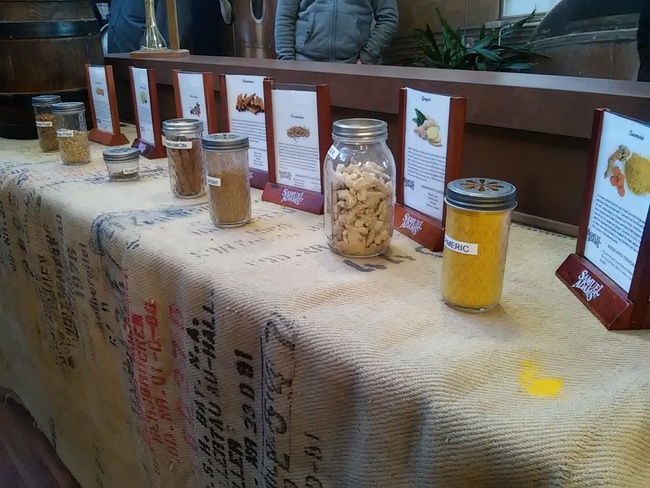 Sam Adam’s lobby/ gift shop was enormous. There was plenty of sensory displays to explore like this spice collection that is used in many of their beer brew flavors.

I couldn’t help but admire the wheat sack table cloth, while I was sampling the spices, either. 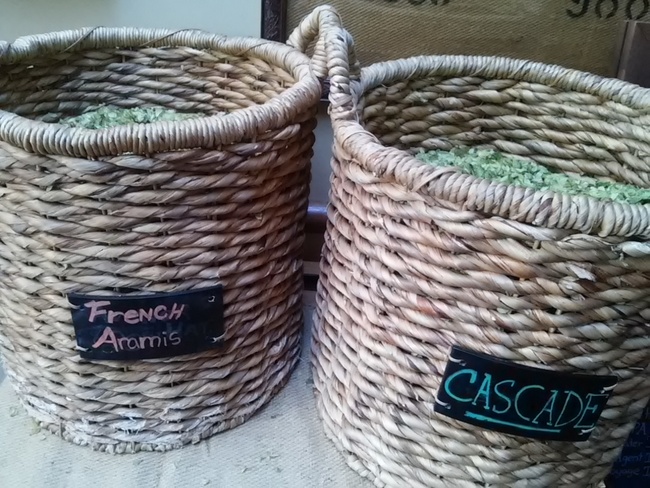 Hopps to beer is like grapes to wine. It makes each brew and brand more unique.

As you can see there is more than beer on a brewery tour.

All three breweries are making beer, but each one of these brands has created an atmosphere that is welcoming to both beer lovers and the not-so beer lovers alike.

After seeing this would you consider visiting a brewery on your next road trip or vacation? I wouldn’t have considered it much before our New England trip, but now I’d be willing in the future.