I went for a “shop your home” approach to create a craft area in our basement update. When we had originally taken down the rather poorly constructed walls in our basement, we were able to salvage the old door that led into the laundry area. 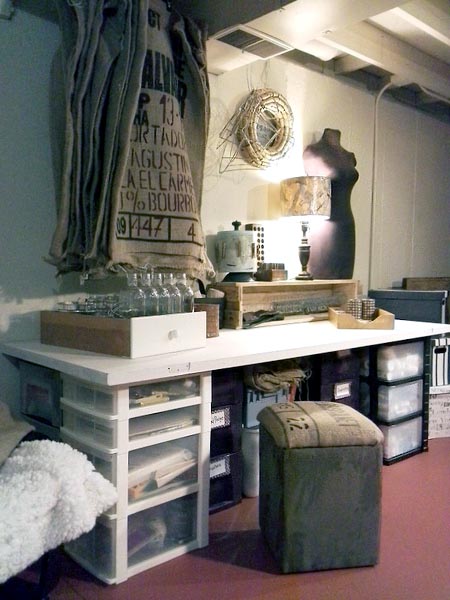 As the basement update progressed, I was also able to conglomerate all of my plastic craft bins that had previously been in various other rooms of the house into one area in the basement.

Once the bins were all in one place, and the old door was nearby leaning up against the wall, the practicle next step that came to mind was placing the old door atop the bins as a craft table. 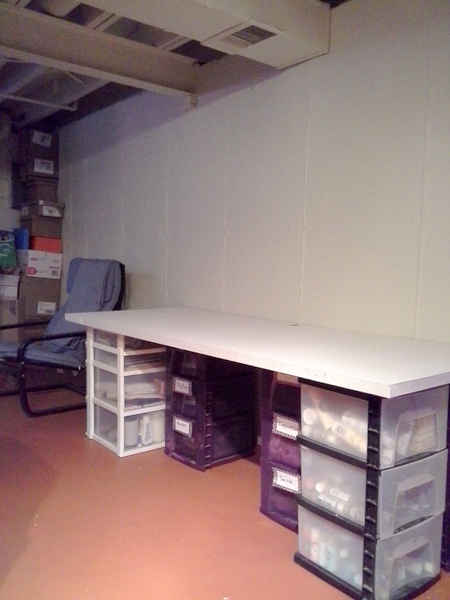 I placed the front of the bins on the outer portion facing outward to the sides, so that I would have access the the drawers, and then placed the other bins on the inside portion with the drawer fronts facing forward. 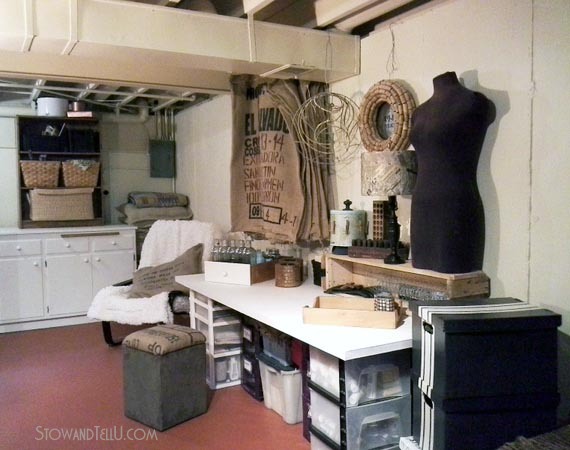 The door handle was removed, which allows for threading through electrical cords, then old door was painted with a fresh coat of white and place on top of the bins. 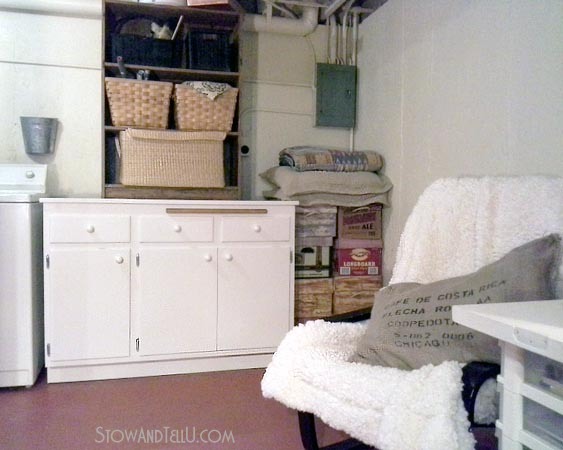 In addition, and just to the left of the old door table went the 2nd cabinet from the pair of Craigslist kitchen cabinets purchased earlier this year. The first was used in the coffee sack cabinet makeover, seen here.

This cabinet was also painted white and it holds all of my paints and a variety of other craft and paint supplies.

On top the paint supply cabinet went a piece of Sauder shelving that I found on someone’s curb.

My plan was to paint it white also, but I decided against it thinking that the faux wood kind of gave the whole unit a look that worked as is, and so it was left alone, but put to good use as storage for the remainder of my painting supplies.

I put several of those chalkboard painted baskets to use holding paint brushes, trays, etc.. hard to see, but they’re on the top shelf.

Placed in the corner and holding our vast collection of CD’s and DVD’s are the faux wood painted storage boxes and the beer box storage boxes.

A quick, easy and inexpensive fix that would otherwise stand out like a sore thumb was draping the blue fabric Ikea chair with a Sherpa throw as part of my furniture freshening goal, seen here,  to finish off the basement. 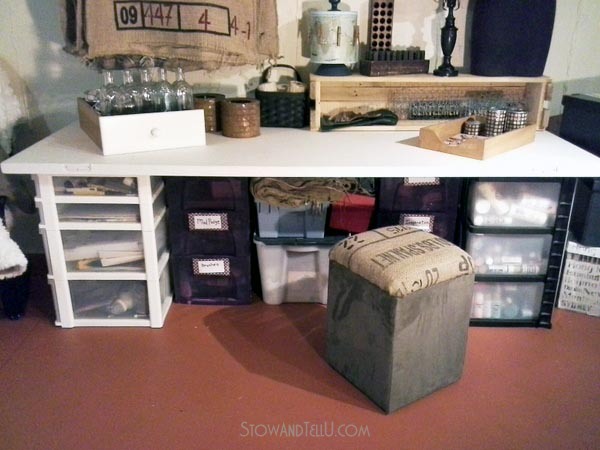 The other furniture freshening-challenged piece is the gray stool, aka small gray ottoman, seen here.

For this piece, I wrapped and stapled the ottoman top with a piece of pre-washed burlap coffee sack. 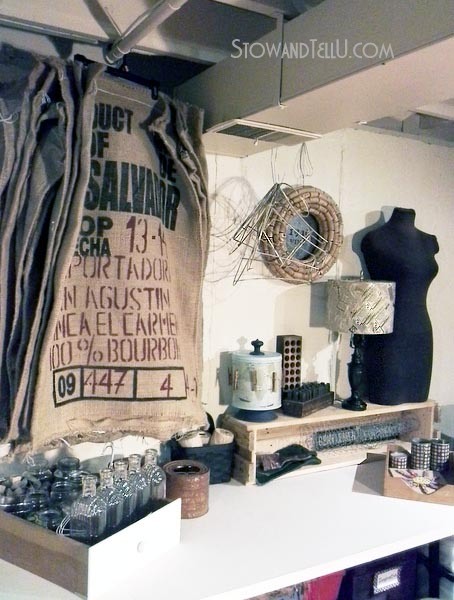 Having such a huge lot of coffee sacks still in my stash, the next challenge was how to store them while saving space, yet keeping them from getting crumpled. 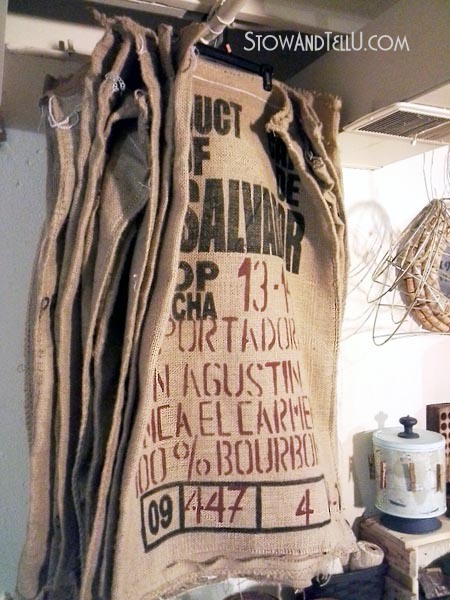 The exposed ceiling with all its pipes and such, allowed for some creativity for this project. Using plastic pant hangers was the solution I came up with and worked out pretty nicely to display the coffee sacks at the same time. Darned if I didn’t just recently donate a bunch of those old wooden pant hangers. Don’t you haaaittte when that happens? 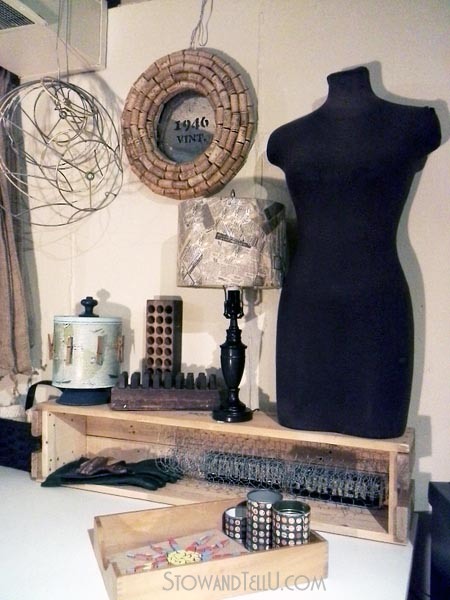 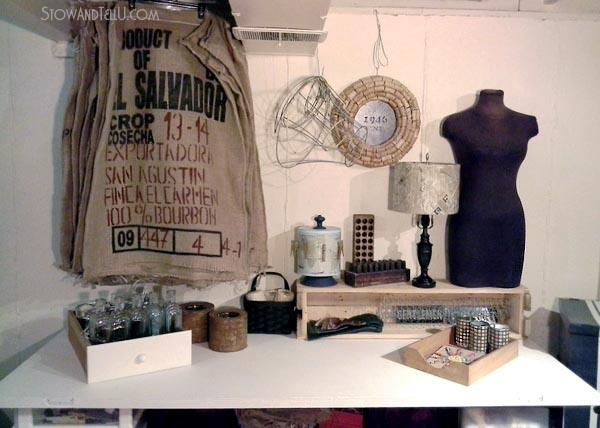 The hanging vertical storage also came in handy for my hoarding of lamp shade frames.

Just about this time is when the “artsy” showed up in this craft area as I added the yet-to-be-given-a-makeover seamstress form, the vintage letter punch set, the vintage newspaper lamp, the cookie tin organizer, the mirrored wine cork wreath, several rusted coffee tins, plenty of jars, bottles and the like that may be starring in future projects. 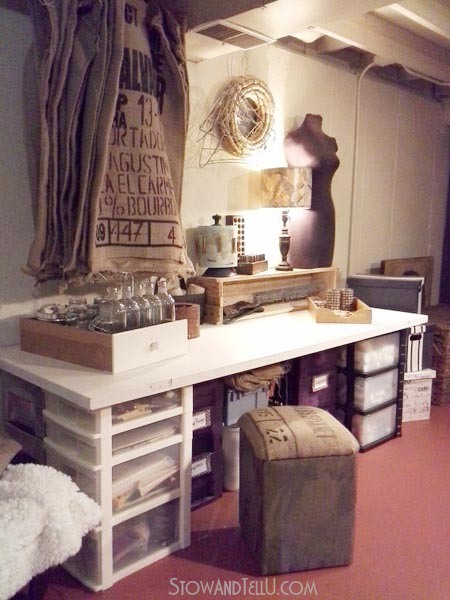 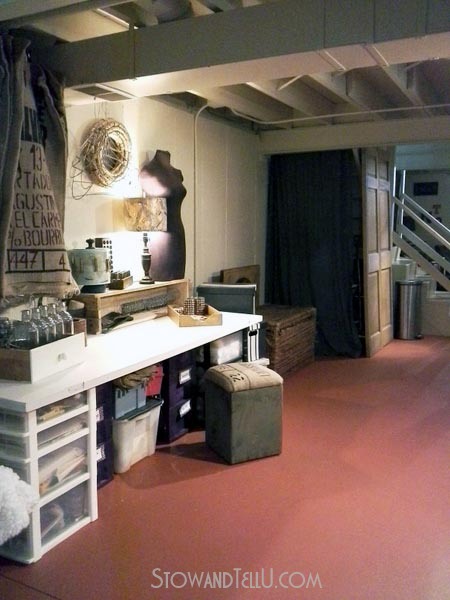 Pulling this area together was quite a treat after the work we did on some of the other areas of the basement. I didn’t really expect to end up with a craft area in the basement when this all started. 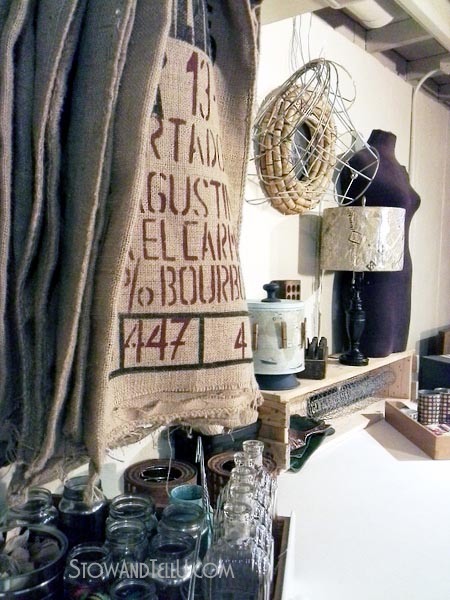 And I didn’t expect it to remind me a little of a vintage flashback to Coco Chanel’s work shop, but somehow, that’s what I feel I’ve ended up with…and I do love it. 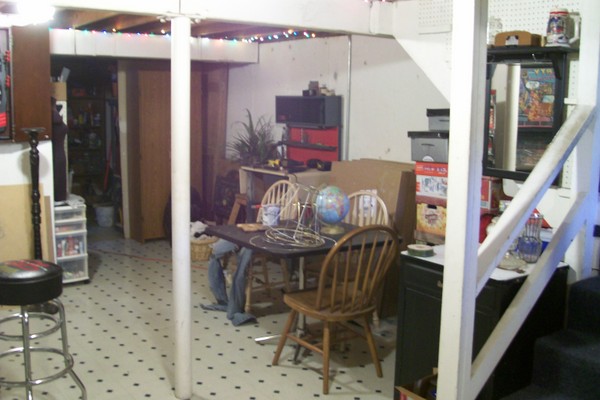 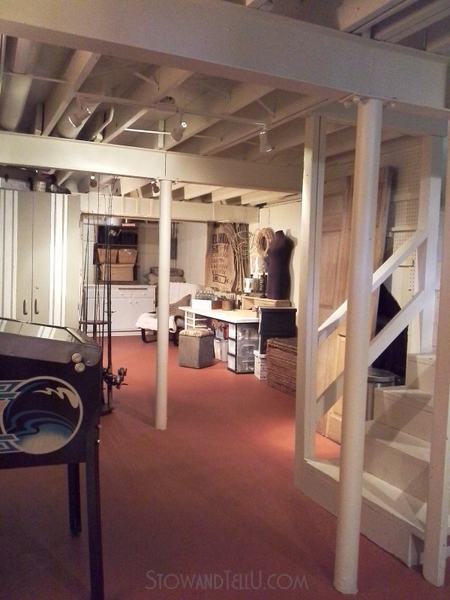 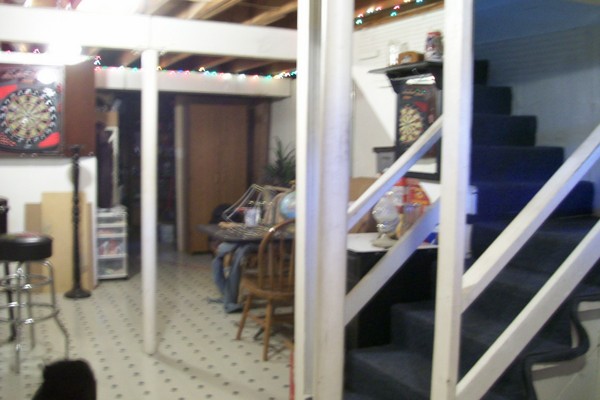 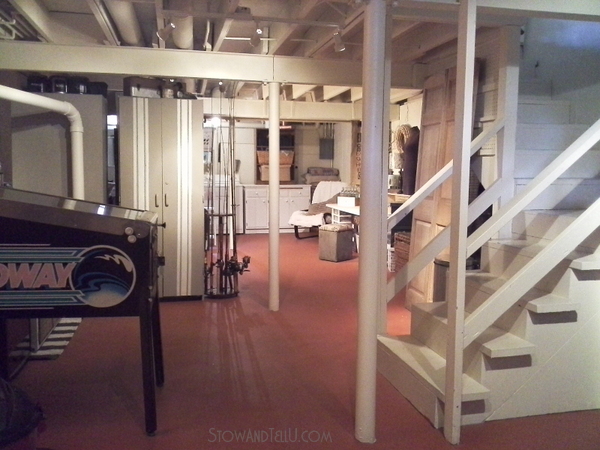 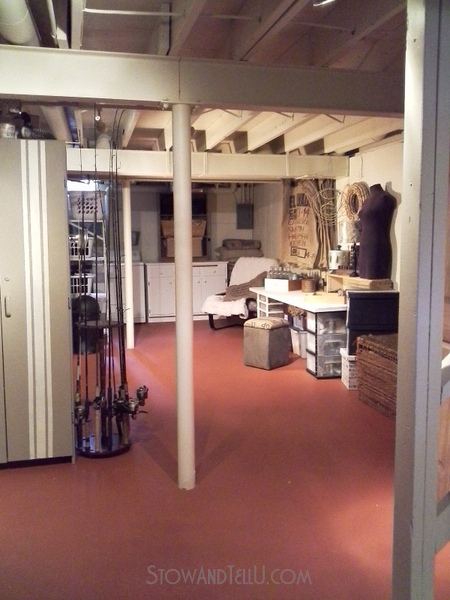 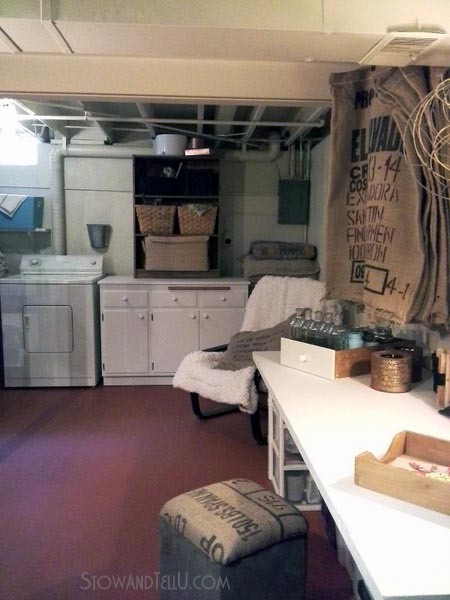 Coming up soon: the laundry area

With my son home and summer going strong, we’ve have several family members spend the night, so even though we know we’ll be moving, it’s been nice to have this area completed while we’ve been enjoying company.

Please pardon the lighting. Still very challenged with natural light in this basement, so I’ve had to tweak some of the photos a bit, so that you could see what’s going on, lol.